Home / Earth Sciences / The "fixed" hotspot that created Hawaii was not stationary after all, study finds
25.07.2003

The "fixed" hotspot that created Hawaii was not stationary after all, study finds 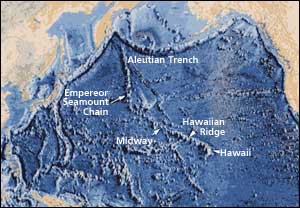 Geologists have long assumed that the Hawaiian Islands owe their existence to a “hotspot” – stationary plumes of magma that rise from the Earth’s mantle to form Mauna Loa, Kilauea and Hawaii’s other massive volcanoes. But a new study posted on the online version of the journal Science disputes that long-standing paradigm by concluding that the fixed hotspot in the Pacific was not stationary after all.

“Our research suggests that the Hawaiian hotspot actually drifted southward between 47 and 81 million years ago during the Late Cretaceous to Early Tertiary,” said David Scholl, consulting professor of geophysics at Stanford University and senior research scientist emeritus with the U.S. Geological Survey in Menlo Park, Calif. “This finding will break across a very cherished idea about how things work in the innards of the Earth.”

Scholl is one of 11 co-authors of the study that appears in the July 24 edition of Science Express online (www.sciencexpress.org). The lead author is geophysicist John A. Tarduno of the University of Rochester, who earned a doctoral degree at Stanford in 1987. His principal collaborator is second author Robert A. Duncan of Oregon State University.

Until now, the prevailing theory among geophysicists has been that, for millions of years, the massive Pacific Plate has been slowly drifting over a fixed hotspot deep in the mantle, creating a trail of volcanoes whose peaks emerge from the ocean as Maui, Oahu and the other islands that make up the 49th state. The Hawaiian Islands are part of a long chain of volcanoes collectively known as the Hawaiian-Emperor Seamounts that stretch some 3,600 miles along the floor of the Pacific – from the Big Island of Hawaii to Alaska’s Aleutian Trench.

The segment known as the Hawaiian Ridge, which includes the Hawaiian and Midway Islands, forms a neat line of volcanoes that extends some 1,800 miles northwest across the Pacific. At that point, the Hawaiian Ridge meets the Emperor Seamounts – an older volcanic chain that abruptly changes course, stretching more than 1,000 miles almost due north to the Aleutian Trench. According to most researchers, this sharp northward bend records a change in the direction of the Pacific Plate as it passed over the fixed hotspot about 47 million years ago.

To test this hypothesis and determine the true origin of the Emperor Seamounts, Tarduno, Scholl and other scientists embarked on a two-month excursion aboard the research vessel JOIDES Resolution to collect samples of solidified lava flows from four submerged volcanoes that form part of the Seamounts chain. The expedition was conducted under the auspices of the Ocean Drilling Program, an international research effort to study the world’s seafloors.

When the voyage ended, the researchers conducted geochemical analyses of the lava samples to determine where and when they formed. Age was determined by the radiometric dating of two chemical elements – potassium and argon.

When a rock forms, atoms of potassium start decaying into argon at a constant rate, regardless of changes in the rock’s temperature, chemistry or pressure. By measuring the number of potassium-derived argon atoms in the samples, researchers were able to estimate that the submerged volcanoes formed some 47 million to 81 million years ago.

Tarduno and his team were able to determine where the volcanoes formed by analyzing a mineral called magnetite in the rock samples. As hot magma from an erupting volcano cools, magnetite residues align with the Earth’s magnetic pole and become locked in place.

“The magnetite behaves like miniature compass needles: The closer they are to the Earth’s magnetic pole, the steeper their position,” Scholl explained. Researchers were able to verify the latitudes at which the seamounts formed by determining the angles at which the magnetite had frozen.

Using these data, the research team concluded that the “fixed” Hawaiian hotspot probably crept southward between 81 million and 47 million years ago at a rate of about 44 millimeters a year, “changing our understanding of terrestrial dynamics,” they wrote.

“Given the central role the Hawaiian-Emperor bend has played as an example of [tectonic] plate motion change, these observations now question whether major plates can undergo large changes in direction rapidly, and whether plate boundary forces alone can play a dominant role in controlling plate motions,” they noted. “These data sets indicate a much more active role of mantle convection in controlling the distribution of volcanic islands.”

“This study raises fundamental questions about how the mantle works and how plates work,” Scholl added. “What’s really going on here? Why do these hotspots drift, and why do they suddenly stop? We know that the mantle moves, now we have to find out how deep the motion goes.”

Future drilling experiments in other ocean basins could provide answers, he noted.