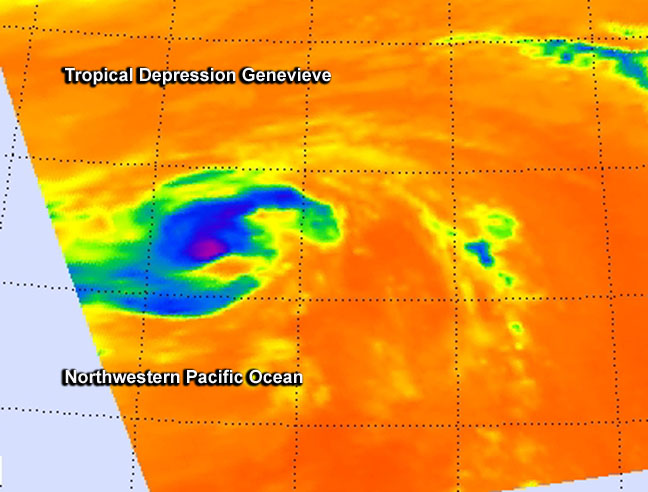 Genevieve moved through all three Pacific Ocean regions (eastern, central and western) in its two week lifetime and met its end today.

AIRS data showed a small area of the strongest thunderstorms were occurring over the northern quadrant, where temperatures approached -63F/-52C. That area was where where the heaviest rain was located.

The Joint Typhoon Warning Center issued its final bulletin on Tropical depression Genevieve on Monday at 2100 UTC (4 p.m. EDT). At that time, Genevieve was located near 34.9 north and 167.6 east, that's about 940 nautical miles north of Wake Island.

Genevieve was born in the Eastern Pacific, moved through the Central Pacific and into the Western Pacific where it finally became a typhoon, actually a super-typhoon.

Genevieve made that Pacific Ocean trek over a period of two weeks and its journey has ended in the Northwestern Pacific Ocean as the storm dissipated on August 12.