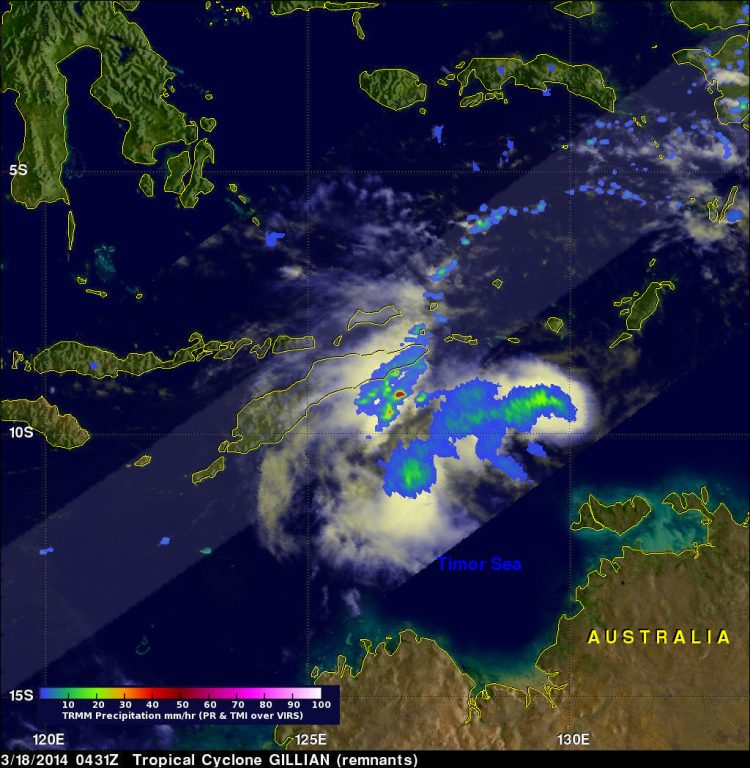 TRMM passed above Gillian's remnants on March 18, 2014 at 0431 UTC and measured rain falling at a rate of over 86 mm/3.4 inches per hour in some intense storms. Image Credit: SSAI/NASA,Hal Pierce

Over the past few days former tropical cyclone Gillian's remnants moved from the Gulf of Carpentaria into the Timor Sea.

The Tropical Rainfall Measuring Mission satellite known as TRMM found a few strong convective thunderstorms when it passed above these remnants on March 18, 2014 at 0431 UTC. TRMM's Precipitation Radar (PR) instrument measured rain falling at a rate of over 86 mm/3.4 inches per hour in some intense storms.

The 3-D image showed that several of the tallest thunderstorms in Gillian's remnants were reaching heights of over 15.75 km/9.8 miles. Radar reflectivity values of over 50.7 dBZ were being returned to TRMM from the heavy rainfall within these storms.

The Australian Bureau of Meteorology issued their last statement on Gillian's remnants on March 18 at 10:45 p.m. CST local time/Darwin.

Gillian's remnants, now in the Southern Indian Ocean basin, are expected to continue moving to the west across the Timor Sea, away from the Northern Territory.