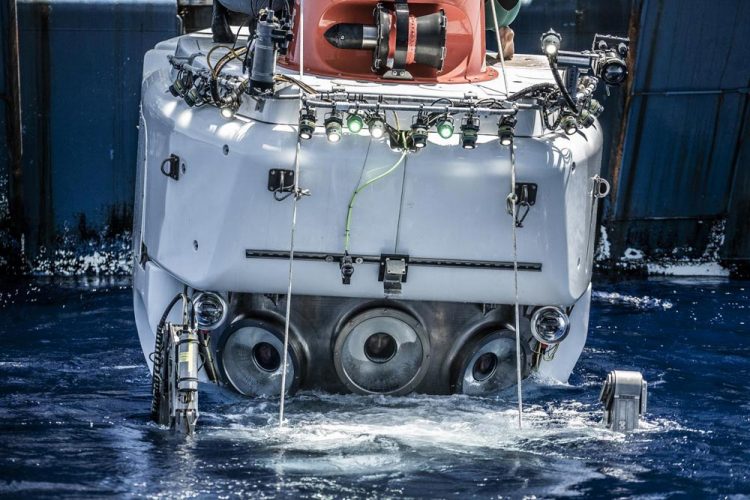 Scientists and engineers on a deep-sea expedition aboard the research vessel Atlantis in the East Pacific Ocean will be broadcasting live to the American Geophysical Union fall meeting exhibit booth from 2:30 to 3:30 p.m. EST on Tuesday, Dec. 11, Wednesday, Dec. 12, and Thursday, Dec. 13.

Funded by the National Science Foundation (NSF), the expedition's scientists and engineers will talk about their research, including their use of submersibles, and answer questions from the audience.

The team aboard ship includes early-career marine scientists learning to plan and execute a research expedition using the U.S. Navy-owned and Woods Hole Oceanographic Institution-operated human-occupied submersible Alvin and the autonomous underwater vehicle Sentry, as well as senior scientists and vehicle engineers. Attendees at the live broadcast will learn about findings made during the expedition.

The NSF-funded expedition is focused on two locations: A seamount chain roughly 1,000 miles south of Manzanillo, Mexico, where the cruise began on Dec. 3, and a volcanically and hydrothermally active portion of a mid-ocean ridge, or underwater mountain range, on the East Pacific Rise.

Research at both sites centers on the processes that drive submarine volcanic activity, the formation of new crust, and how elements and heat are exchanged between the interior and the surface of our planet.

The audience will have the opportunity to connect with young scientists at the start of their careers in marine geology, geophysics, chemistry and biology, and to hear what it takes to organize a modern deep-submergence research expedition.

What: Live two-way broadcasts from the research vessel Atlantis in the East Pacific Ocean.

Who: Scientists and engineers participating in an NSF-funded research expedition to study the deep sea.

*Journalists not attending AGU, as well as the general public, will be able to participate remotely here.