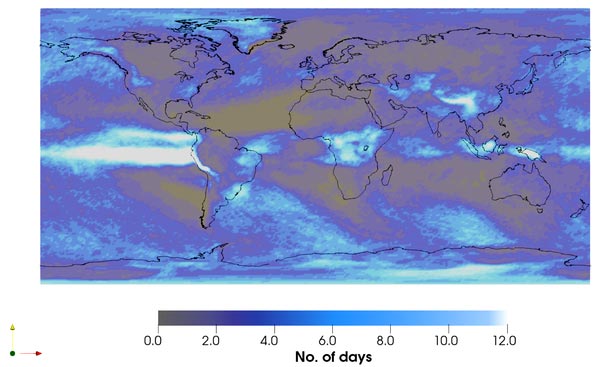 Extreme precipitation days per decade due to greenhouse warming over the 21st century. The first step in deriving the pattern shown is identifying the once-in-ten-year events of maximum precipitation over 2000-2009 for the 100 simulations. Here, this threshold is chosen as the lowest of the top 100 values of precipitation. For the second step, the number of days over 2090-2099 that exceed the threshold value is counted, and thereby while a value of 1 on the scale (units of days) means that there is no change in future, a value of 6 indicates 5 additional days of extreme precipitation in future. Note that the color scale saturates at 12 days to emphasize the response over land, given the very large amplitude over the eastern equatorial Pacific domain.
Credit: Institute for Basic Science

There is growing public awareness that climate change will impact society not only through changes in mean temperatures and precipitation over the 21st century, but also in the occurrence of more pronounced extreme events, and more generally in natural variability in the Earth system. Such changes could also have large impacts on vulnerable ecosystems in both terrestrial and marine habitats. A scientific exploration of projected future changes in climate and ecosystem variability is described in a new study published in the journal Earth System Dynamics, representing the result of a broad collaborative partnership between the IBS Center for Climate Physics (ICCP) at Pusan National University in South Korea and the Community Earth System Model (CESM) project at the National Center for Atmospheric Research (NCAR) in the US.

The team conducted a set of 100 global Earth system model simulations over 1850-2100, working with a “business-as-usual” scenario for relatively strong emissions of greenhouse gases over the 21st century. The runs were given different initial conditions, and by virtue of the butterfly effect they were able to represent a broad envelope of possible climate states over 1850-2100, enabling sophisticated analyses of changes in the variability of the Earth system over time. The nominally one-degree (~100km) resolution of the model, in conjunction with the 100-member set of runs, represented an unprecedented set of technical challenges that needed to be met before advancing to the goal of assessing how climate variability is impacted by sustained anthropogenic changes to the climate system. “We met these challenges by using the IBS/ICCP supercomputer Aleph, one of Korea’s fastest supercomputers” says Dr. Sun-Seon Lee from the ICCP, a co-author of the study who ran the simulations together with her NCAR colleague Dr. Nan Rosenbloom. For the project, approximately 80 million hours of supercomputer time were used, and approximately 5 Petabytes of disc space (approximately 5000 normal hard discs) were required for storage of the model output.

The main finding of the study is that the impact of climate change is apparent in nearly all aspects of climate variability, ranging from temperature and precipitation extremes over land to increased number of fires in California, to changes in bloom amplitude for phytoplankton in the North Atlantic Ocean. Each of these changes has important impacts for sustainable resource management. As an example, occurrences of extreme precipitation events over the 21st century (between 2000-2009 and 2090-2099, see attached Fig. 1) indicate that extremes are expected to become more commonplace over many regions. These projected changes in precipitation extremes are in fact representative of the omnipresence of changes in extremes in the future across a broad range of climate and ecosystem variables, which has important implications for future adaptation strategies.

“In addition to large-scale changes in extreme events, our study also identified large-scale changes in the structure of the seasonal cycle over the 21st century, showing an enhanced growing season length over the continental regions north of 50°N”, says Dr. Keith Rodgers from the ICCP, first author of the study and a co-lead of the CESM2 Large Ensemble Project. Largely due to mean state warming and ensuing changes in the timing of the retreat and advance of winter snow cover, by the end of the 21st century growing season length is projected to increase by three weeks.

Taken together, the computer simulations reveal that across our planet we can expect widespread changes in climate variability, ranging in timescales from synoptic storms to seasons to that of El Niño to decades. Dr. Gokhan Danabasoglu, a co-author of the study and a co-lead of the project, says “an important step moving forward will be to identify more fully the potential societal impacts and to communicate the implications for adaptation strategies.” This broader study has already motivated a number of more specialized scientific investigations using the tremendous volume of output from the simulations, spanning topics from marine ecosystem impacts to hydrological changes that affect water supply.