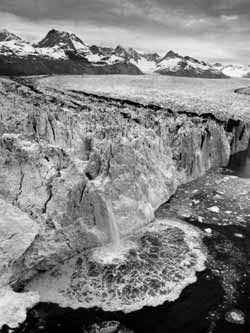 Tad Pfeffer, a fellow of CU-Boulder's Institute of Arctic and Alpine Research and his colleagues made calculations using conservative, medium and extreme glaciological assumptions for sea rise expected from Greenland, Antarctica and the world's smaller glaciers and ice caps — the three primary contributors to sea rise. The team concluded the most plausible scenario, when factoring in thermal expansion due to warming waters, will lead to a total sea level rise of roughly 3 to 6 feet by 2100.

A paper on the subject was published in the Sept. 5 issue of Science. Co-authors of the study were of the University of Montana's Joel Harper and Shad O'Neel of the Scripps Institute of Oceanography at the University of California, San Diego. The study was funded by the National Science Foundation and a University of Colorado Faculty Fellowship.

“We consider glaciological conditions required for large sea level rise to occur by 2100 and conclude increases of 2 meters are physically untenable,” the team wrote in Science. “We find that a total sea level rise of about 2 meters by 2100 could occur under physically possible glaciological conditions but only if all variables are quickly accelerated to extremely high limits.”

“The gist of the study is that very simple, physical considerations show that some of the very large predictions of sea level rise are unlikely, because there is simply no way to move the ice or the water into the ocean that fast,” said Pfeffer.

The team began the study by postulating future sea level rise at about 2 meters by 2100 produced only by Greenland, said Pfeffer. Since rapid, unstable ice discharge into the ocean is restricted to Greenland glacier beds based below sea level, they identified and mapped all of the so-called outlet glacier “gates” on Greenland's perimeter — bedrock bottlenecks most tightly constraining ice and water discharge.

“For Greenland alone to raise sea level by two meters by 2100, all of the outlet glaciers involved would need to move more than three times faster than the fastest outlet glaciers ever observed, or more than 70 times faster than they presently move,” said Pfeffer. “And they would have to start moving that fast today, not 10 years from now. It is a simple argument with no fancy physics.”

In Antarctica, the majority of ice entering the ocean comes from the Antarctic Peninsula and the Pine Island and Thwaites glaciers, said Pfeffer. Most of the marine-based ice in West Antarctica is held behind the Ross and Filcher-Ronne ice shelves, which Pfeffer's team believes are unlikely to be removed by climate or oceanographic processes during the next century. The researchers used varying glacier velocities to calculate sea-rise contribution estimates from the Antarctic Peninsula, Pine Island and Thwaites glaciers.

Considering all major sources of sea level rise, including Greenland, Antarctica, smaller glaciers and ice caps and the thermal expansion of water, the team's most likely estimate of roughly 3 to 6 feet by 2100 is still potentially devastating to huge areas of the world in low-lying coastal areas, said Pfeffer.

Some scientists have theorized that continuing warming trends in Greenland and Antarctica could warm the Earth by 4 degrees F over the present by 2100. The last time that happened, roughly 125,000 years ago during the last interglacial period, glacier changes raised sea level by 12 to 20 feet or more. But the time scale is poorly constrained and may have required millennia, Pfeffer said.

“In my opinion, some of the research out there calling for 20 or 30 feet of sea rise by the end of the century is not backed up by solid glaciological evidence,” said Pfeffer.

Policymakers need to be able to predict sea level accurately if communities, cities and countries around the world are going to be able to plan effectively, Pfeffer said. “If we plan for 6 feet and only get 2 feet, for example, or visa versa, we could spend billions of dollars of resources solving the wrong problems.”