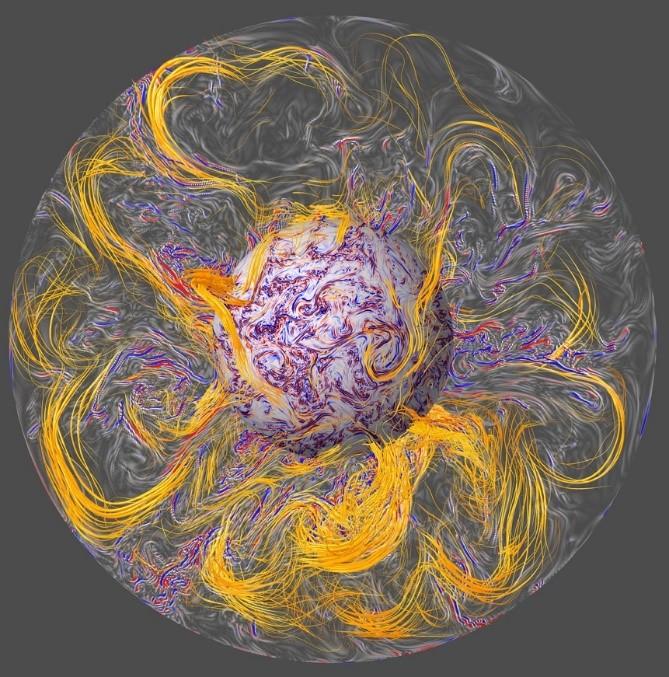 Visualization of the interior of the Earth's core, as represented by a computer simulation model (view of the equatorial plane and a spherical surface near the inner core, seen from the North Pole). Magnetic field lines (in orange) are stretched by turbulent convection (in blue and red). Hydromagnetic waves are emitted from the inner core, and spread along the magnetic field lines up to the core's boundary, where they are focused and give rise to geomagnetic jerks. Credit: © Aubert et al./IPGP/CNRS Photo library

The Earth's magnetic field is produced by the circulation of matter within its metallic core, via the energy released when this core cools. Researchers know of two types of movements that cause two types of variations in the magnetic field: those resulting from slow convection movement, which can be measured on the scale of a century, and those resulting from “rapid” hydromagnetic waves, which can be detected on the scale of a few years.

They suspected that the latter played a role in the jerks, but the interaction of these waves with slow convection, along with their mechanism of propagation and amplification, had yet to be revealed.

To solve this mystery, Julien Aubert from l'Institut de physique du globe de Paris (CNRS/IPGP/IGN/Université de Paris) developed, with a colleague from the Technical University of Denmark (DTU), a computer simulation very close to the physical conditions of our core. The simulation required the equivalent of 4 million hours of calculation, and was carried out thanks to the supercomputers of GENCI.

Researchers were subsequently able to reproduce the succession of events leading to geomagnetic jerks, which arise in the simulation from hydromagnetic waves emitted in the inner core. These waves are focused and amplified as they approach the core's surface, causing magnetic disturbances comparable in all ways to the jerks observed.

This research project was financed by the Fondation Simone et Cino Del Duca of Institut de France, which supports fundamental research in the Earth Sciences through one of its scientific grants.