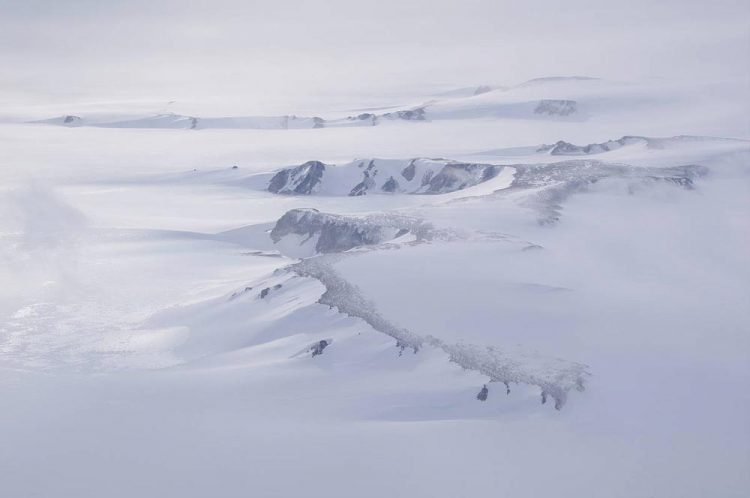 During the Antarctic summer of 2013/14 AWI experts used radar to survey Recovery Glacier from on board the research aeroplane Polar 6 (Photo: Alfred-Wegener-Institut / Daniel Steinhage)

In the course of an extensive Antarctic expedition, researchers from the Alfred Wegener Institute, Helmholtz Centre for Polar and Marine Research recently investigated several lakes beneath Recovery Glacier that had been previously detected by satellite remote sensing.

The experts found very few substantial bodies of water, which is a surprising result: up to that point, the scientific community had assumed that overflowing lakes below the East Antarctic Ice Sheet were the reason that ice masses began sliding and forming ice streams to begin with. This new study has just been released in the Journal of Geophysical Research.

Recovery Glacier, located in the Coats Land region of Antarctica, has always been a slumbering giant, transporting ice from the high plateau of the East Antarctic Ice Sheet down toward the Weddell Sea at a snail’s pace of only 10 to 400 metres per year. Its drainage area stretches nearly 1000 kilometres inland from the Filchner Ice Shelf on the coast, and is nearly three times the size of Germany.

These two aspects could make the glacier into a potential threat, in the event that climate change accelerates its tempo some time in the future. According to forecasts, if this comes to pass, Recovery may also be the stream through which East Antarctica loses the most ice. A global sea-level rise would be the direct result.

Yet, even after an expedition by glaciologists from the Alfred Wegener Institute, Helmholtz Centre for Polar and Marine Research (AWI), the reason why the ice masses of Recovery Glacier are in motion is no clearer than before.

The research community had previously assumed that meltwater lakes below the East Antarctic Ice Sheet were the cause, the idea being that said lakes occasionally overflow their banks, creating a lubricating film on which the ice above can slide, like when a car begins to aquaplane. This was especially believed to hold true for those regions of the East Antarctic Ice Sheet in which gravity alone isn’t sufficient for the ice to flow that fast; this also includes Recovery Glacier’s region of origin.

“From satellite imagery of the glacier we can see, especially in the upper drainage basin, several flat, uniform areas on the surface. We had previously assumed that there were giant lakes below them that initiated the ice stream. Without these lakes, it was believed, streams like the Recovery Ice Stream could never form,” says Prof. Angelika Humbert, first author of the new study and head of the AWI’s Glaciology section.

Humbert and her colleagues can now disprove this hypothesis. In an extensive expedition during the Antarctic summer of 2013/14, the AWI experts used radar to survey Recovery Glacier from on board the research aeroplane Polar 6. The data collected provides an indication as to whether the ground below the ice stream is wet or dry. According to Humbert, “Before our expedition, the form of Recovery Glacier and the characteristics of the underlying rock were largely unknown. Thanks to our data, we can now fill in some of the blank spots on the map of Antarctica.”

However, when it comes to large lakes – they had expected to find ones as large as Lake Constance – the scientists came up empty-handed, even though they analysed the radar data for every known lake criterion.

“To be on the safe side, we also used satellite data and double-checked the previously detected changes in elevation, which are an indicator of flooding lakes. Though we can reproduce the findings of our colleagues, and can certainly understand why they expected to find lakes there, we simply weren’t able to confirm the presence of water at the respective locations,” Humbert adds.

Thanks to Russian and British research projects at Lake Vostok and Lake Ellsworth, we know that there certainly are subglacial lakes in the Antarctic. “These lakes are accumulations of meltwater, which is created when subterranean heat begins melting the ice from below. Over thousands of years, the water slowly gathers in these depressions,” explains AWI glaciologist and co-author Dr Thomas Kleiner.

Unfortunately, thanks to their latest findings, the AWI researchers now have more questions than answers on the role of subglacial lakes. “Our new results show that flooding lakes can’t be the critical mechanism for the formation of an ice stream,” says Angelika Humbert.

“At the same time, we’ve now identified certain weaknesses in our radar-based techniques, which raises the question as to whether they’re truly the best way to detect subglacial lakes. Since surface and elevation analyses have proven unsuitable, if we truly want to understand what sets ice streams in motion, the only remaining option is seismic measurements.”

Seismic studies can’t be conducted from on board aircraft, and land expeditions to regions as remote as Recovery Glacier are far more involved than the already-difficult aerial campaigns. Nevertheless, the AWI researchers plan to launch a follow-up expedition: in the Antarctic summer of 2020/21, they intend to take another look below the ice of Recovery Glacier by recording a seismic traverse.

At the same time, one of the AWI’s research aeroplanes will use the institute’s new ultra-wideband ice radar to scan the glacier. Taken together, the two approaches will hopefully shed new light on what makes the ice of Recovery Glacier begin sliding in its region of origin. Insights into the mechanisms responsible for this and other ice streams are urgently needed, as they can be incorporated into ice and climate models to enhance their forecasting accuracy.

When the embargo is lifted, printable images and graphics will be available at: https://www.awi.de/en/about-us/service/press.html