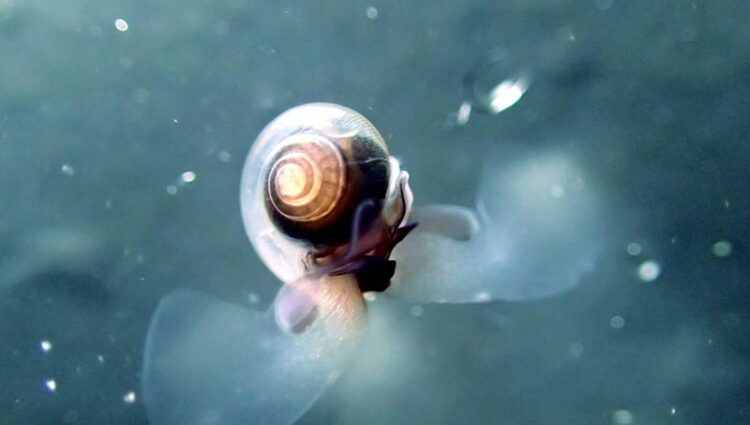 Sea snails - the picture shows a pteropod - play an important role in the marine food web. They are especially sensitive to ocean warming and acidification.
Credit: © Charlotte Havermans

It’s not just the land that is groaning under the heat – the ocean is also suffering from heatwaves. In the Mediterranean Sea along the Italian and Spanish coasts, for example, water temperatures are currently up to 5 °C higher than the long-term average at this time of year. Scientists have investigated marine heatwaves for a few years now – for example at the University of Bern. However, relatively little is known about how marine heatwaves co-occur with other extreme events in the ocean.

Such events are known as compound events and considered to be a major risk of climate change. While the processes that lead to extreme events on land, such as floods, forest fires, heatwaves, or droughts and how they interact with each other have been intensively studied in the past, the finding that ocean weather and climate extreme events can also occur in combination is relatively new.

A group of researchers at the Oeschger Center for Climate Change Research, led by Thomas Frölicher, has now investigated whether marine heatwaves co-occur in combination with extreme events in other potential marine ecosystem stressors. In addition to heat, potential stressors also include high acidity levels in the ocean. “For the first time, we have quantified the frequency of compound events in which marine heatwaves happen together with extreme acidity”, says Friedrich Burger, postdoctoral researcher and first author of the study just published in the journal Nature Communications. Extreme events of high ocean acidity are occurrences where the proton concentration in seawater is higher than normal.

The main finding of the study, which is based on monthly observations from the surface open ocean from 1982 to 2019, is that marine heatwaves and extreme ocean acidity events occur relatively often together. This means that the negative impacts of past marine heatwaves were potentially exacerbated by extreme acidic conditions. “We can show,” says ocean modeler Friedrich Burger, “that these compound events are most common in the subtropical oceans, but comparably rare in the high latitudes and tropical Pacific.”

The co-occurrence of marine heatwaves and ocean acidity extremes in regions such as the subtropical oceans is caused by an increase in acidity at higher temperatures. However, if the

temperature increase causes also other effects, such as less mixing of relatively more acidic subsurface water with surface water, a heatwave can also reduce acidity and thus decrease the frequency of compound events. This happens in the Southern Ocean or the tropical Pacific. “To determine the relative frequency of combined extreme events, it is crucial to understand the effects of heatwaves on the circulation, biology, and chemistry of the respective ocean region” says Jens Terhaar, co-author of the study.

Compound events in the ocean are increasing strongly

As a result of climate change and continuing CO2 emissions, extreme events such as marine heatwaves and ocean acidity extremes will continue to increase in frequency, and so will compound marine heatwave and ocean acidity extreme events. Earth system model simulations conducted by the Bern researchers show that the number of days in which marine heatwaves and high acidity events co-occur increases 22-fold at a global warming of 2 °C compared to pre-industrial conditions. “This large projected increase may have severe impacts on marine ecosystems,” said Thomas Frölicher, co-author.

A team led by Frölicher had already shown the impact of marine heatwaves in a 2018 Nature study. The conclusion was that ocean heatwaves can irreversibly damage ecosystems and may pose a threat to fisheries. Although there is evidence that marine organisms can be further harmed by the concurrence of warm and acidic seawater conditions, still relatively little is known about the biological effects of co-occurrences of marine heatwaves and ocean acidity extremes.

This study was supported by the Swiss National Science Foundation and the European Union’s Horizon 2020 research and innovation program.