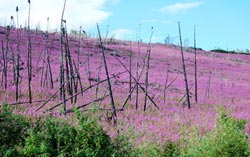 Fireweed dominates a landscape once covered in black spruce in Alaska's Yukon Flats.<br>

A 2,000-square-kilometer zone in the Yukon Flats of interior Alaska–one of the most flammable high-latitude regions of the world–has seen a dramatic increase in both the frequency and severity of fires in recent decades, according to research funded by the National Science Foundation (NSF).

Wildfire activity in this area is higher than at any other time in the past 10,000 years, the researchers report.

The research, funded by NSF's Division of Polar Programs, adds to the evidence that relatively frequent and powerful fires are converting the conifer-rich boreal forests of Alaska into deciduous woodlands.

Whether the shift to deciduous forests–which traditionally have been thought to be more fire-resistant–will overcome the fire-inducing effects of a warming climate remains to be seen.

“The evolution of climate is a complicated response to many interacting processes,” noted William Wiseman, Arctic Natural Sciences program director. “This study develops a theory, using historical data, concerning how boreal forests respond to climate-induced changes in fire regime through a negative feedback process that stabilizes the regional system. Although it presents initial evidence that the present day boreal forests are responding to fire in a related fashion, only time will tell whether this is indeed true.”

A paper describing the study appears in the Proceedings of the National Academy of Sciences.

“We reconstructed the fire history by picking charcoal fragments out of sediments preserved over thousands of years,” said University of Illinois doctoral student Ryan Kelly, who led the study with Illinois plant biology professor Feng Sheng Hu. “And from what we can tell, the fire frequency at present is higher than it has been at any time in the past 10,000 years.”

The researchers looked at the charcoal and pollen content of mud collected from the bottoms of 14 deep lakes in the Yukon Flats.

“We chose this area because today it is one of the most flammable boreal ecoregions of North America,” Hu said. “So we are focusing in a specific area that is highly flammable, and we are focusing on periods of climate fluctuation during the Holocene. We're trying to figure out what happened in the past to help us to project what may happen in the future.”

The Holocene epoch began about 11,700 years ago and continues to the present.

The team paid close attention to a particularly warm period in the Holocene. This period, called the Medieval Climate Anomaly (MCA), occurred roughly 1,000 to 500 years ago. Global temperatures and tree species in the Yukon Flats were similar during the MCA to conditions today.

“This period probably wasn't really as warm as today, definitely not as warm as it's bound to get in the future, but may be the most similar to today,” Kelly said. “There was lots of burning, almost as much as today, and the fires were particularly severe.”

The researchers found that the composition of tree species in the Yukon Flats gradually shifted during the MCA–from forests dominated by coniferous trees to woodlands populated by the relatively fire-resistant deciduous trees.

“The same kind of change in tree species is occurring today,” said Kelly. Much of his study area has burned in the last decade, with young deciduous trees now growing where black spruce once stood.
Current wildfire activity in the study area, however, has already surpassed the limit seen during the MCA, Kelly said. The average fire frequency in this region during the last 3,000 years was nine or 10 fire events per 1,000 years. But in the last 50 years, the number of wildfire events has doubled, to almost 20 per 1,000 years, he said.

“That's like a fire every 50 years, whereas in the past it was closer to a fire every hundred years,” Kelly said.

The findings are notable because boreal forest covers more than 10 percent of the earth's land surface and contains a vast amount of carbon, primarily in the soil, Kelly said.
“There is more carbon in the boreal forests than in the atmosphere,” he said. “And one of the main ways that the carbon that's accumulated over thousands of years gets out of the soil is through burning.”

The release of this carbon from fires adds to the greenhouse gases in the atmosphere, potentially leading to additional climate warming, he said.

“The Yukon Flats region appears to be undergoing a transition that is unprecedented in the Holocene epoch,” Hu said. “And the transition may be indicative of what will happen throughout much of the North American boreal forests in the decades to come.”
“Ryan's study area is already covered by deciduous forest because so much spruce has burned recently–it's already different than the vast majority of boreal forests,” Hu said. “The climate today appears to be warmer than in the past 10,000 years in that region, and we know that the climate is continuing to warm up.”

As warming continues, Hu said, it's plausible that even deciduous forests will become highly flammable.

The work is the result of two separate NSF awards: Impacts of Climatic Change on the Boreal-Forest Fire Regimes of Alaska: Lessons from the Past and Prospects for the Future and Integrating Paleoecological Analysis and Ecological Modeling to Elucidate the Responses of Tundra Fire Regimes to Climate Change. A National Parks Ecological Research Fellowship also supported the research.

The National Science Foundation (NSF) is an independent federal agency that supports fundamental research and education across all fields of science and engineering. In fiscal year (FY) 2012, its budget was $7.0 billion. NSF funds reach all 50 states through grants to nearly 2,000 colleges, universities and other institutions. Each year, NSF receives about 50,000 competitive requests for funding, and makes about 11,500 new funding awards. NSF also awards about $593 million in professional and service contracts yearly.