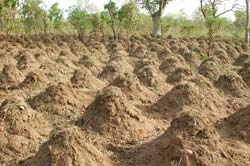 Cultivating yams in the north of the Ivory Coast: the tubers are planted in mounds of earth; cashew trees grow in the background. This combination eliminates the natural vegetation almost entirely, resulting in a massive depletion of fauna. Photo: Karl Eduard Linsenmair<br>

In Africa, in particular, the survival of large numbers of people is directly dependent on farming. How must land use there be organized in order to cushion the impact of climate change? This is the subject of a new major research project involving biologists and geoscientists from the University of Würzburg.

For West African countries, the savannahs are a kind of “granary”: here the climate and soils are so favorable that millet, maize, vegetables, and other important crop plants all thrive. But these are the very areas for which climate forecasts are predicting uncertain rainfall patterns and longer droughts, jeopardizing the supply of staple foods to the population and threatening their livelihoods as a result.

How can these basic essentials in West Africa be protected for the long term? How can agriculture be harmonized with ecology? To answer these questions, the Federal Ministry of Education and Research (BMBF), in partnership with ten West African states, has launched the WASCAL project (West African Science Service Center on Climate Change and Adapted Land Use). A sum of up to EUR 50 million is being contributed by the ministry to this project.

With this initiative, the BMBF is responding to a call from the G8 summit in 2007 at which the major industrial nations urged more support for efforts in Africa to combat the consequences of climate change. After all, with its low pollutant emissions, Africa is the world’s smallest contributor to climate change, but it is affected particularly severely by its impact.

The countries participating in WASCAL are Benin, Burkina Faso, the Gambia, Ghana, the Ivory Coast, Mali, Niger, Nigeria, Senegal, and Togo. The project is being coordinated by the Center for Development Research at the University of Bonn. Teams from the University of Würzburg led by Professor Stefan Dech (Department of Remote Sensing in Geography) and Professor Karl Eduard Linsenmair (Animal Ecology and Tropical Biology at the Biocenter) are also involved. Both groups have spent many years researching land use and biodiversity in West Africa.

How are the West African savannahs used right now? Which areas of land are farmed, and which are populated with trees? What plants are cultivated? These are questions that interest Dr. Tobias Landmann, a geographer at the Department of Remote Sensing, which works closely with the German Aerospace Center (DLR) in Oberpfaffenhofen.

“For this project, we will also be using data acquired by the DLR with state-of-the-art satellites,” says Landmann. “The surface of the earth will be measured with a temporal and spatial resolution that is new for this region, enabling a distinction between parcels of cultivated land with edges measuring just five meters in length.” Based on these and other satellite data, the geographers will then draw up maps indicating the nature of the land use and the various crop cultivation systems. One of the objectives is to distinguish between irrigated fields and areas where natural rainfall is the only source of water.
Climate change and land use

The geoscientists will also combine current satellite data with a series of different measurements that are already available to them from their many years of research in West Africa. “Our aim with this is to show how the landscape and its use have changed since the mid-1980s, where, for example, natural pastures have been converted into farmland, or where tree populations have managed to recover,” explains Landmann. Are the changes connected to the effects of climate change? This is another aspect that the researchers wish to clarify.

Among the issues that tropics expert Karl Eduard Linsenmair will be exploring as part of the WASCAL project is how the landscape must look if farmers are to be able to make optimum use of the “natural services” of the ecosystems. He explains what this actually means by giving an example: “The pollination of numerous agricultural crops requires insects, and termites play an important role in maintaining soil fertility.”

Insects will only provide such services if they are able to survive in areas populated by people. This is the case, for example, if there are semi-natural islands of vegetation in the landscape. How many insects regularly migrate from these islands, and how far into the farmland do they go? This is one issue that will be investigated by the Würzburg researchers. “Knowing this will give us a proper idea of how the landscape needs to be structured geographically in order to enable adequate pollination,” says the professor.

New lease on life for the Comoé Research Station

A central hub of the WASCAL project will be the ecological field research station set up by Linsenmair in Comoé National Park in the 1990s. The professor is particularly pleased about this because for ten years it was not possible to use the station in the north of the Republic of the Ivory Coast due to a civil war that raged in the country from 2002 onwards.

“Once the situation calmed down, the Ivorian Government approached us with a wish to extend the station and convert it into a center of excellence for biodiversity and climate change studies.” Funding for this operation is being provided by the Fritz Thyssen Foundation, which already made a significant financial contribution to the erection of the station.

The research station in Comoé National Park will also offer African doctoral students an opportunity to engage in combined field and laboratory work. Training young African scientists is an important part of the WASCAL project, with several graduate schools for young researchers from the ten countries involved also included. The Department of Remote Sensing is also a partner of one of the WASCAL graduate schools.

Dr. Tobias Landmann, Institute of Geography and Geology at the University of Würzburg, T +49 (0)931 31-81869, tobias.landmann@uni-wuerzburg.de
http://www.fernerkundung.geographie.uni-wuerzburg.de/en/research/projects/current_projects/wascal/

Homepage of the WASCAL project: http://www.wascal.org