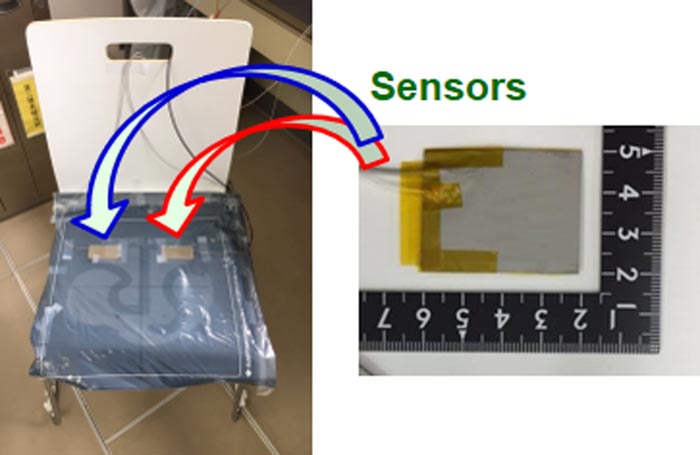 Sensors attached to the seat of a chair detect upper-body movements; the sensors could someday be used in cars to tell when a driver is impaired.
Credit: Adapted from ACS Applied Electronic Materials 2021, DOI: 10.1021/acsaelm.1c00603

The bipartisan infrastructure bill recently signed into law by President Joe Biden includes a requirement for automakers to install driver monitoring systems that detect intoxicated or impaired drivers. Current systems rely on cameras, which have limitations. Now, researchers reporting in ACS Applied Electronic Materials have made heat-resistant, pressure-detecting sensors that, when attached to seats, can tell whether a driver is drowsy or has a sudden illness, signaling a future smart car to take action.

Most current drowsiness detection systems use an exterior, forward-looking camera to monitor lane position or sudden, exaggerated corrections. Others use an interior camera to check a driver’s face or eyes for signs of nodding off. Camera-based systems, while useful, have drawbacks. For example, an exterior camera could be blocked by mud, and an interior camera could be less effective at night. Scientists have previously explored using piezoelectric sensors – self-powered materials that accumulate an electrical charge in response to pressure – for monitoring a driver’s posture, which changes when a person falls asleep, has a sudden health emergency or is intoxicated.

However, existing piezoelectric sensors cannot withstand high temperatures, a requirement for electrical and electronic equipment in vehicles. Toshimi Nagase and colleagues wanted to develop flexible, heat-resistant piezoelectric sheet sensors that could be embedded in a vehicle’s seat to monitor the driver’s posture.

The researchers prepared zinc oxide-based films directly on a polyimide surface and then screen-printed a silver paste on both sides to obtain a piezoelectric sheet. They connected a coaxial cable to detect changes in electrical charge with pressure and then folded the sheet in half around the cable. The sensor sheet resisted heating up to 250 F, with no changes in its properties. After showing that the sensor could discriminate changes in mechanical load, the team placed a sensor in the back of a chair. By detecting a seated person’s slight body movements, the sensor allowed the researchers to calculate the person’s respiration and pulse rates. Two other sensors attached to the seat of a chair could sense when a person leaned left or right with their upper body, which could indicate drowsiness.

The researchers say that in the future, a monitoring system based on the sensors might detect changes in vital signs or body posture, triggering a self-driving car to find a safe location and then stop. The vehicle could also contact emergency healthcare providers, depending on the situation. To get to that point, the next step is to test the piezoelectric sensors in a car, where vehicle motions and vibrations will contribute to background noise in the measurements, the team says.

The authors acknowledge funding from the Ministry of Education, Culture, Sports, Science and Technology, Japan.

The abstract that accompanies this article is available here.