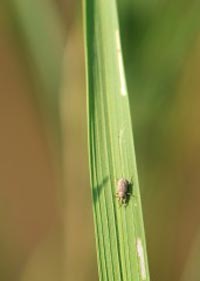 (Photo by Delta Research and Extension Center/Jeff Gore)<br><br>The rice water weevil, such as this adult on a rice leaf, is one of the most troublesome insect pests in rice, but seed treatments have proven to be effective in controlling them. The scars on the leaf are evidence of the rice water weevils’ feeding.<br>

One recent example is the development of seeds treated with insecticides to discourage early damage by crop pests. Researchers at Mississippi State University have been evaluating the effectiveness of rice seed treatments to find out what producers can expect from the extra investment. Their research saves farmers time and money while helping them make informed decisions about managing their fields.

After testing scores of samples taken from rice fields across the state, MSU scientists found that seed treatments are effective in managing the crop’s most troublesome insect pests.

“In Mississippi, we’ve been evaluating seed treatments for about five years,” said Jeff Gore, entomologist with the Mississippi Agricultural and Forestry Experiment Station and MSU Extension Service. “Our research has shown that rice grown with a seed treatment typically yields from 8 to 12 bushels more per acre than untreated rice. The main reason for that yield increase is rice water weevil control.”

Gore said seed treatments are effective in both conventional rice varieties and hybrids.

“Although they do not provide 100 percent control of rice water weevil, seed treatments do provide significant benefits in rice,” he said. “Because control is not absolute, a foliar insecticide application may be necessary to maximize control in some situations.”

Gore works at the Delta Research and Extension Center in Stoneville. He said researchers take core samples about 4 inches in diameter and 8 inches deep from farms across the Delta, wash them and count the rice water weevil larvae.

Gore said that seed treatments provide other benefits to rice producers, too.

“Seed treatments provide good control against a whole complex of other rice pests,” he said. “Seed treatments help manage chinch bugs, grape colapsis, thrips and soil insects, such as wire worms and white grubs, and get the plants off to a good, healthy start.”

Seed treatments for row crops, such as corn, cotton or soybean, target early-season pests that are in the soil when the seed is planted. But rice seed treatments are different.

“We’re targeting primarily rice water weevils, and they only move into the field when producers establish the permanent flood about three to six weeks after planting,” Gore said. “So seed treatments for rice have to last longer than in other crops, because they are sitting in the field a lot longer.”

“Because rice is grown in aquatic or semi-aquatic environments, we needed to find out how different water management practices might impact the seed treatments’ performance,” he said.

Andrew Adams, an MSU graduate student from Greenville, set up tests in grower fields across the Delta and at the Delta Research and Extension Center.

“To determine the impact of a delayed flood, we looked at flood timings of six and eight weeks after planting, which is about two months that the seed treatment was sitting in the soil without having insect pressure,” Adams said. “Where we delayed the permanent flood until eight weeks after planting, the seed treatment was not compromised and no yield losses were observed.”

Adams also looked at the impact of flushing fields. Flushing a field is a form of irrigation where the field is brought to a shallow flood and then drained.

“Flushing is used for herbicide incorporation, seed germination or for irrigation during hot and dry conditions,” he said.

Adams tested zero, one and two flushes with water across a rice field to check the efficacy of three different seed treatments.

“The management practice that showed significant improvement in rice water weevil control beyond the seed treatment was a foliar overspray with a pyrethroid on hybrid rice,” Gore said.