Home / Agricultural and Forestry Science / How the forest copes with the summer heat
29.08.2018

How the forest copes with the summer heat 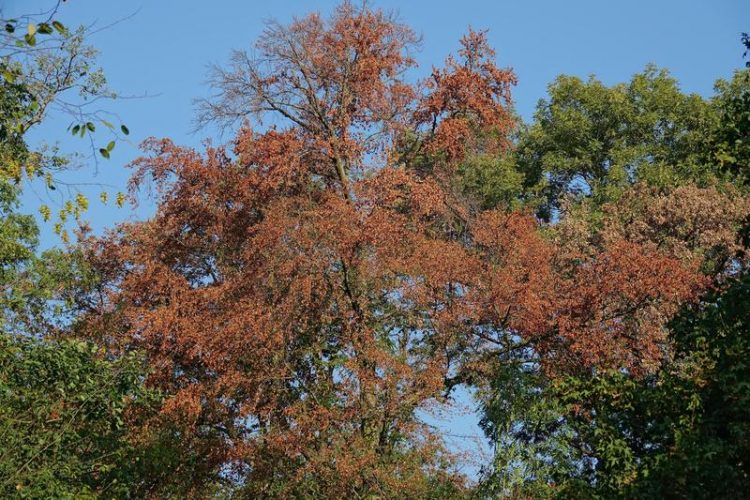 Trees try to protect themselves from extreme drought with various measures such as, for instance, premature leaf shedding. Photo: Dr. Urs Weber, University of Basel, Department of Environmental Sciences

Trees depend on photosynthesis to produce sugar for their metabolism. To this end, they have to absorb carbon dioxide (CO2) through small pores on their leaves. Considerable amounts of water evaporate in this process with adult beech trees losing up to 400 liters a day.

This water has to be replaced on a daily bases by water uptake from the soil. The water is then transported from the roots to the leaves via vessels in the trunk. For the water to be transported, it requires a low pressure that is created by the loss of water in the leaves.

Drying out or starving

When the soil dries out, the low pressure in the plants further declines. If it becomes too low, the pathways can suffer considerable damage, so that water no longer reaches the leaves and the tree begins to desiccate.

Trees can, however, prevent dessication by closing their pores during low water availability. This reduces water loss and avoids extreme low pressures in the conductive pathways.

Closing the pores, however, comes at a price as the rate of photosynthesis declines with the pores closed. If the pores remain closed for a long time, the tree can no longer produce sugars and ultimately risks starvation. Based on these principles it had been conventional wisdom that trees run the risk of either desiccation or starvation during extreme dry spells. Reliable data for this important phenomenon have, however, not been available until now.

Researchers at the University of Basel were now able to show that the most important native tree species are surprisingly well prepared against extreme drought. Their findings are based on a three-year study, including the year 2015, which was also marked by an extremely hot and dry summer. By closing their pores, they prevent damages to their conductive pathways and thus avoid the risk of desiccation. The researchers found no evidence that the long-lasting pore closure leads to a reduction in the trees` sugar reserves.

Based on their investigations, the researchers conclude that the trees are physiologically surprisingly well equipped to survive extreme drought events as the one in 2015 by means of effective pore closure and adequate sugar storage. Initial data from the heat wave of 2018 confirm these results.

But why is it that the forest turns yellow already in early August if our trees are well equipped against drought? “Premature leaf shedding is another safety measure to protect the trees from drying out. It is a controlled biological process and for the moment not alarming,” states study leader Professor Ansgar Kahmen from the Department of Environmental Sciences at the University of Basel.

“Although brown leaves are no longer able to carry out photosynthesis, the sugar reserves are already quite full at this time of year, so the tree should be able to survive the winter as well,” explains the plant scientist.

It is, however, crucial that the leaf buds survive the drought without damage. “The buds have already been planted to sprout new leaves next year. Whether this is the case, we can judge only next spring.”

Too early to sound the all-clear

Despite the trees` remarkable ability to survive a period of drought, the researchers do not give the all-clear. While our trees are obviously well equipped to cope well with single events such as the heat summers of 2015 or 2018, it remains unclear whether their safety mechanisms are sufficient to withstand a continuous increase in heat and drought events.

The researchers also point out that although trees can physiologically resist a single year of drought, they might emerge weakened and thus become susceptible to insect infestation, for instance.