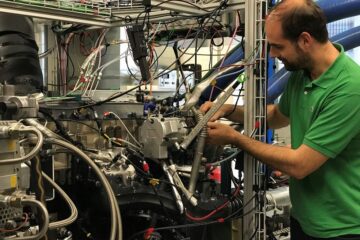 In future, commercial vehicles will not only have to emit less CO2 but also meet stricter exhaust emission limits. Many experts expect that this could herald the end for fossil…

Anyone who has ever flown a kite during a strong windstorm is familiar with the kind of power tugging at the kite’s line. Stunt kites and drones can utilize…

Getting blade bearings in shape for the turbines of the future

In wind turbines in the 7-10 MW range, the wind drives blades of up to 80 m in length. Blade bearings, the interface between the hub and the blades, are the…

Americans are increasingly installing wind turbines near their homes, farms and businesses to generate their own energy, concludes a new report released today.The 2012 Market Report on Wind Technologies in Distributed Applications is the first comprehensive analysis on a growing field called distributed wind, which involves generating wind energy close to where it will be used instead of purchasing power from large, centralized wind farms. Distributed wind can range from a small, solitary turbine in someone’s backyard to several large turbines that power a manufacturing facility or a neighborhood….

Representatives of the three partners, the German Aerospace Centre (DLR), ForWind, the Center for Wind Energy Research of the Universities Oldenburg, Hannover…

Until now, wind farm owners and operators had no way to compare their output with the output of similar operations. To benchmark the reliability of the U.S….

For a motorized hangglider or a one-seater weighing 300 kilograms: the business of flying by ultra-light aircraft is booming. That is also why numerous…