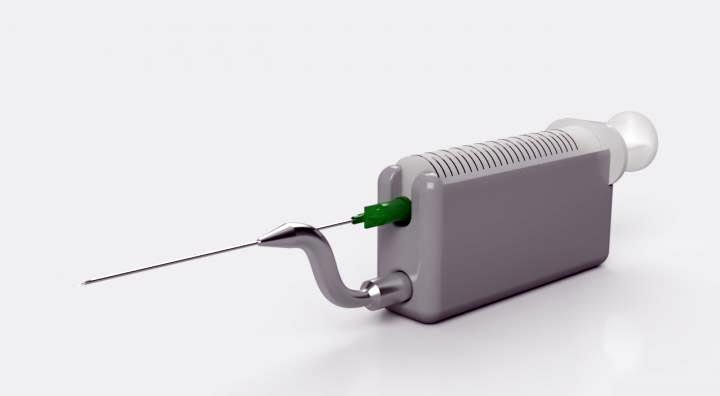 The diagnosis of diseases like cancer almost always needs a biopsy – a procedure where a clinician removes a piece of suspect tissue from the body to examine it, typically under a microscope. Many areas of diagnostic medicine, especially cancer management, have seen huge advances in technology, with genetic sequencing, molecular biology and artificial intelligence all rapidly increasing doctors’ ability to work out what’s wrong with a patient. However the technology of medical needles hasn’t changed dramatically in 150 years, and – in the context of cancer management – needles are struggling to provide adequate tissue samples for new diagnostic techniques. Now researchers have shown that modifying the biopsy needle to vibrate rapidly at 30,000 times per second not only provides sufficient data for 21st century diagnostic needs, but is also potentially less painful and less traumatic for patients.

“Biopsy yields – the amount of tissue extracted – are often inadequate, with some studies showing that up to a third of fine-needle biopsies struggle to get enough tissue for a reliable diagnosis,” says Professor Heikki Nieminen, at Aalto University, Department of Neuroscience and Biomedical Engineering. “A biopsy can be painful, and the wait for the results from a diagnostic test can be a highly distressing time for the patient and family, especially if diagnosis needs re-biopsies to be conclusive. We wanted to make the procedure more gentle for the patient, and increase the certainty that the test will be able to give us an answer on the first attempt.” Professor Nieminen was visiting the University of Toronto, Canada, to work with Professor Kenneth Pritzker, a Pathologist at Mount Sinai Hospital, Toronto, as well as a university researcher in the Temerty Faculty of Medicine. It was while they were at lunch one day that Pritzker suggested that maybe the solution to the problem could be addressed with the help of ultrasound.

One of the least painful biopsy methods is called ‘fine-needle biopsy’, which uses a needle the same thickness as in many other medical procedures. However for more advanced diagnostic treatments – like those used in cancer – fine-needles alone don’t get enough material routinely enough, so the current practice is often to use a much thicker needle, called a core needle. “They are painful for the patient and can also cause bleeding – you don’t want to use a core needle unless you have to.” says Pritzker. “At body temperature, human tissue exists as something that behaves part-way between being a solid and a liquid. The breakthrough here is that by making the needle tip vibrate ultrasonically, we’re able to make the tissue flow more like a liquid, which allows us to extract more of it through a narrow needle.”

In a new paper, published in Scientific Reports, the team is sharing with the wider world how well these ultrasonic vibrating needles work. “The vibrations provide energy to the tissue to make it more fluid-like,” explains the first author of the paper, Emanuele Perra, who works in Nieminen’s group at Aalto University. “The vibrations are localised to just the tip, so it doesn’t affect any other tissue except a small region around the needle. We were able to show that the ultrasonic vibrations increase the biopsy yield by 3 to 6 times compared to the same needle without ultrasound, which was even greater than we hoped for.” The vibrations are far above the hearing range for humans, and the amplitude of the waves is small enough that it shouldn’t feel much different to a normal blood test.

The big increase in the amount of tissue extracted in the biopsy means it is very useful for the growing trend for high-tech cancer treatment. One such example is molecular diagnostics, which examine the chemical makeup of tumours, to allow doctors to target treatment more effectively to a specific cancer type. “Molecular diagnostics is an expensive process, and it is an expensive waste of money to have it fail because the quality of the material gathered in the biopsy wasn’t previously good enough,” explains Pritzker.

The technology that powers the needle is non-linear acoustics, where vibrations passing through a material have such large amplitude that they interact with the material itself. These interactions allowed the needle’s designers to focus all the energy to just the tip of the needle, and measure their effects. “We’ve been able to characterise the vibrations at the end of the needle really well. We’ve used high speed cameras that have allowed us to study the physical effects of the vibrating needle on boundaries between fluids, solids and air in unprecedented detail,” says Nieminen. “The rich understanding we’ve managed to get of the physics allowed us to design the medical device and understand how it could be used for different medical purposes.”

The needle is expected soon to move into studies with real cancer patients, although for the time being only four-legged ones. A specialist veterinary hospital in Canada is soon expected to be trialing the device on domestic pets with cancer, and if all goes as expected, the team hopes that their needles will be used in human patients soon after.

“Modern oncology doesn’t just take a biopsy at the beginning of treatment”, explains Nieminen. “Increasingly, oncologists want to be able to take multiple biopsies to track how the tumors are changing and responding over the course of the treatment. We want the tools for these biopsies to be as effective and painless as possible.”

While the team is preparing the needles for the real world biopsies, they are also excited about future applications that they are still researching. “The effect that ultrasonic vibrations have on tissue might also be able to work the other way” explains Perra, “the vibrations might make it easier to deliver pharmaceuticals in a targeted way to tissue like the liver. They might also be able to break up small hard objects in soft tissue, like kidney stones, or even small tumours – all minimally invasively.” By combining experts in acoustics physics with experts in medical technology, the team hopes that many more innovations will arise from their 21st century upgrade of the humble medical needle.

The paper Ultrasonic Actuation of a Fine-Needle Improves Biopsy Yield, is published in Scientific Reports DOI: https://doi.org/10.1038/s41598-021-87303-x The work was funded by the Academy of Finland. Professors Nieminen and Pritzker are shareholders in Swan Cytologics Inc., Toronto, Canada, which aims to commercialise the technology and hold pending patents for it.