Why Tehran Is Sinking Dangerously 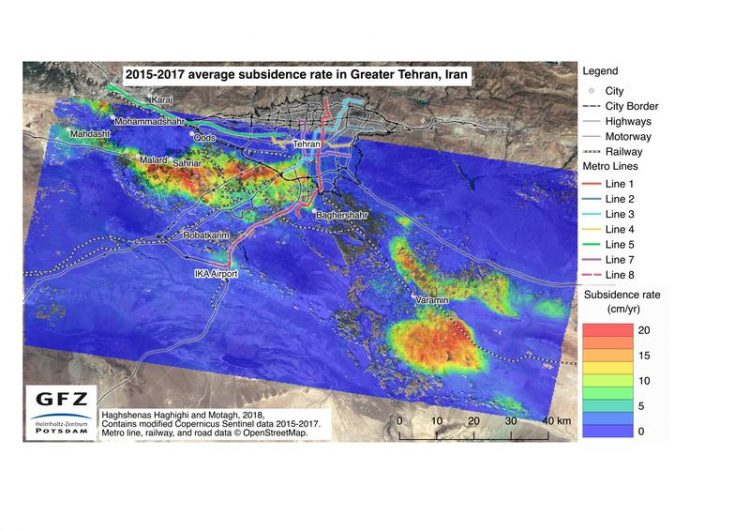 Tehran is sinking: 2015-2017 average subsidence rate in Greater Tehran based on data of the Sentinel satellite system. Credit: Haghshenas Haghighi and Motagh, 2018 (GFZ)

Iran has a water problem. The reserves in many groundwater basins there have been severely depleted. For the last forty years, the country has invested a lot in the agricultural sector and has been striving to be independent in its food supply.

In order to cover the increased water demand, groundwater basins have been exploited to a considerable extent in a hardly state-regulated way.

In addition, the government built a lot of dams to store water for specific purposes, particularly in agriculture. However, this restricted the natural inflow into the country's groundwater basins in the downstream, in turn contributing to desertification and serious environmental issues like shrinkage of Lake Urmia, the world's second-largest salt lake in northwest Iran, and frequent dust and sand storms in recent years in the Khuzestan province in the southwest.

In the region around Tehran, the capital city of eight million inhabitants, the demand for water has also risen sharply due to the influx of many new inhabitants over the last four decades. The number of wells there rose from just under 4000 in 1968 to more than 32.000 in 2012. In addition, there was a lack of rainfall in periods of drought, which have occurred more frequently in recent years. All of this has greatly lowered the groundwater level – in Tehran, for example, by twelve meters between 1984 and 2011.

In parts of Tehran, the surface has sunk by several meters

This poses another problem: the ground above the groundwater basins is sinking. Mahdi Motagh and Mahmud Haghshenas Haghighi from the Remote Sensing Section of the GFZ German Research Centre for Geosciences in Potsdam report on the magnitude of this effect in a study published in the journal “Remote Sensing of Environment”.

Using data from four different radar satellite systems, the two researchers measured the subsidence of the Earth's surface in the Tehran region. They found out that between 2003 and 2017 three areas sank there with rates of sometimes more than 25 centimetres per year, and several meters in total.

For the first time, this study traces in detail and with precise measurements the temporal course of the subsidence in the region over a longer period of time.

Crevices in the ground and cracks in building walls are, for example, consequences of the deformations, say Haghshenas Haghighi and Motagh. They also found out that the groundwater basins in certain areas were irreversibly damaged by the exploitation.

In the future, they will no longer be able to store as much water as they used to. However, scientifically sound plans for water management could help defuse the situation, say the two researchers. “Science and research could support Iranian administrations and governments to revise their water management policy for a sustainable development,” says Motagh.

For their analysis, Haghshenas Haghighi and Motagh used the radar interferometry method InSAR (Interferometric Synthetic Aperture Radar). With this technique, high-precision radar signals in the microwave range recorded by satellites can be used to create images of the topography of the Earth's surface.

To document changes in the surface, the researchers used nine data sets from the satellite systems Envisat ASAR, ALOS PALSAR, TerraSAR-X and Sentinel-1 from 2003 to 2017. They combined the data sets to investigate the short and long-term responses of the Earth's surface to changes in groundwater levels.

Of particular importance were satellite images from the Sentinel-1 mission, which provides high-resolution radar images with a swath of 250 kilometers from the Tehran region every 24 days since 2014 and every 12 days since 2016. “This makes it possible to analyze geohazards, such as land subsidence, almost in real-time,” says Motagh.

Next, the two researchers want to expand their area of research and measure the subsidence of the land outside Tehran using Sentinel-1. “The exploitation of such data to address subsidence over large areas brings new challenges that need to be tackled by developing advanced tools for mining of massive streams of radar images,” says Haghshenas Haghighi.

This work was supported by the Initiative and Networking Fund of the Helmholtz Association in the Helmholtz Alliance `Remote Sensing and Earth System Dynamics'.

Graphic: 2015-2017 average subsidence rate in Greater Tehran based on data of the Sentinel satellite system. (Credit: Haghshenas Haghighi and Motagh, 2018)