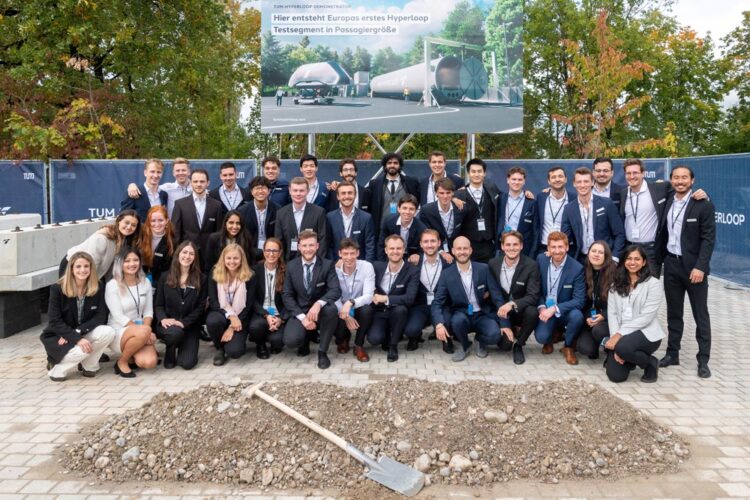 The TUM Hyperloop research team at the groundbreaking ceremony for the Hyperloop test track at the Technical University of Munich (TUM) on the TUM campus in Ottobrunn on Sept. 30, 2022.
(c) Andreas Heddergott / TUM

The next milestone for the Technical University of Munich (TUM) Hyperloop research program has been achieved. The groundbreaking for the 24-meter-long TUM Hyperloop test segment took place on September 30, 2022 at the Ottobrunn/Taufkirchen site. The event was attended by Bavaria’s Minister President Dr. Markus Söder and the Bavarian Minister of Science and the Arts Markus Blume. The test segment is the first of its kind in Europe.

Almost two years after the beginning of the Hyperloop research program, the TUM researchers are ready for the next round. Born as a student initiative in 2020, the TUM Hyperloop program has been working intensively on an innovative form of overland travel reaching unprecedented speeds. “TUM Hyperloop’s objective is to develop the technology that will make the sustainable high-speed transportation of the future a reality,” says Gabriele Semino, TUM Hyperloop project manager.

The project is now moving model scale to full scale with the full-sized 24 meter long test segment. In addition to the ultra-high-strength concrete tube, plans include a test pod with magnetic levitation technology capable of transporting passengers. The TUM Hyperloop test segment is the first European test facility of its kind and is intended to specifically explore the viability of use in human transportation. The overall system is also to be investigated in terms of scalability, including aspects such as vacuum technology and overall operation.

The new testing facility at the TUM Ottobrunn/Taufkirchen site can be divided into three fundamental sub-areas. The most visible part of the demonstrator is the concrete tube which will later carry the passenger pod. Here the primary research focus is on the seal in full scale, since the Hyperloop system is based on an almost complete vacuum. The second major research area will be the pod itself. Here, in addition to the magnetic levitation system, emphasis is on the safety of the passengers in the tube’s vacuum. The third and final area is the operation control system and thus the control of the tube and pod as well as the drive system in the tube. “We’re integrating all the key systems in the demonstrator. This makes it possible to investigate the technical feasibility of the Hyperloop concept as a whole. The full-scale realization and the realistic passenger cabin mean that in the last step the system can be certified and thus used for actual passenger transportation,” says Semino.

The TUM Hyperloop program has been a part of the Hightech Agenda Bavaria since 2020 and is thus partially funded by the State of Bavaria. As part of the Department for Aerospace and Geodesy, TUM Hyperloop relies on extensive expertise and resources which have played a central role in the development of the program. A large number of departments, experts and students at TUM as well as external partners are involved in the project.

Dr. Markus Söder, Member of the Bavarian Landtag and Bavarian Minister President:
“Science fiction is becoming reality. The Hyperloop is the vision of a completely new and emission-free type of transportation at over 400 km/h. Now we’re building a 24 meter long testing tube for 3.5 million euros. Bavaria lives out the spirit of high-tech and start-ups. Ottobrunn will be home to the largest aviation and astronautics department in Europe. The investments made by our Hightech Agenda are greater than those of any other German state: 3.5 billion euros to accommodate 13,000 new students and 1000 professorships. Technology is the future.”

Markus Blume, Member of the Bavarian Landtag and Bavarian Minister of Science and the Arts:
“A groundbreaking step towards the mobility of the future! Europe’s first Hyperloop test segment in full-scale passenger size is taking shape in Ottobrunn. The vision: sustainable, ultra-fast and safe transportation. The realization: Made in Bavaria. Talented young individuals putting their incredible enthusiasm for innovation and impressive expertise to the test: Passion for technology and the future are part of the Bavarian way of life. Here we are turning science fiction into reality!”

Prof. Dr. Gerhard Kramer, TUM Vice President:
“The Hightech Agenda Bavaria showcases the TUM Ottobrunn and Taufkirchen site in its best light. Here we can literally put our hands on enthusiasm for technology. The TUM Hyperloop research program evolved from teams of TUM students who were able to prevail over the strongest competition in international contests. We as a university are very proud of this performance. We are very pleased that the Bavarian state government is generously supporting this program and that the construction of the test segment is now entering the next phase.”

The Hyperloop team has been pursuing the vision of making mobility sustainable and more than anything faster than has been possible in the past since its formation in 2015. The team, at the time still a student initiative, was founded in order to participate in the SpaceX Hyperloop Pod competitions launched by Elon Musk and his space travel company. The TUM team came in first in all four of competitions. Inspired by these successes the student project evolved into what is now the TUM Hyperloop program. The objective of the project is to construct a reference segment for the Hyperloop system across several levels before the end of the decade. The system is to be capable of transporting passengers at approximately 850 km/h.