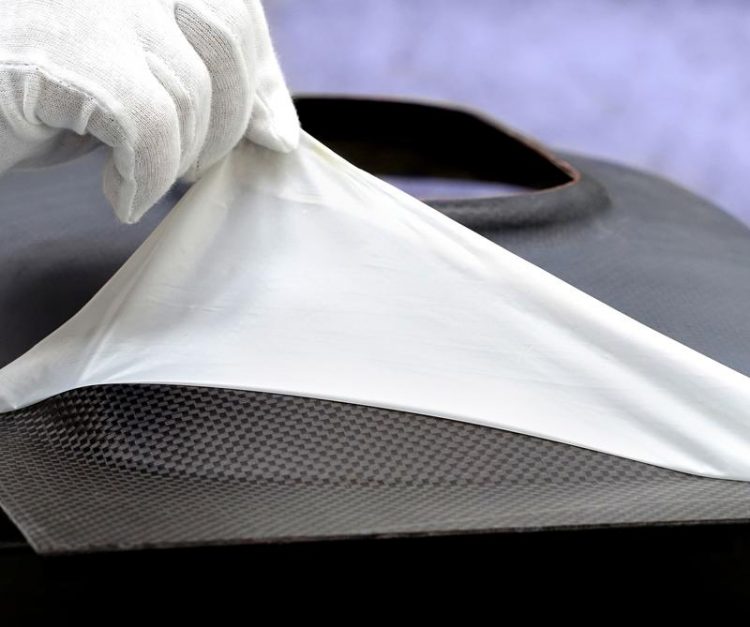 Removal of FlexPLAS<sup>®</sup> release film from a contaminant-free CFRP component after curing in the hot press. © Fraunhofer IFAM

The plasma-coated FlexPLAS® release film developed by Fraunhofer IFAM (Bremen and Stade) has already been successfully used for a number of years for the manufacture of contaminant-free fiber reinforced plastic (FRP) components. In collaboration with Infiana Germany GmbH & Co. KG this technology is now being adapted and further developed for special customer requirements.

It is used to replace conventional release agents and allows components to be removed from molds without any residuals. Additionally, the mechanical separation of the component from the mold via the film means the molds have a considerably longer service life. FlexPLAS® release film is a worldwide first, namely it is the only flexible plasma-polymer coated release film that allows the manufacture of contaminant-free FRP components.

Also, high and constant component quality is guaranteed and no time-consuming sanding of components after curing is required. There is furthermore no need to clean or apply release agent to the molds, so increasing the added value. The research work has demonstrated that FlexPLAS® release film can also be used for molds of more complex geometry by adapting the process steps and parameters for prepregs in hot presses. The film provides protection for the cured component and can be easily removed, so leaving a clean matt surface that can be coated/lacquered without further pre-treatment.

The next development steps are explained by Joachim Scheller, Project Leader for Adaptive Application Systems: “We will start by implementing an already planned automation concept for release agent free FRP manufacture in complex press-molds. As a result, we will increase the degree of automation of the film feed, the inserting of the preform, and the component removal and so further increase the benefit of using FlexPLAS® release film for the hot pressing of prepregs.”

The Automation and Production Technology team at Fraunhofer IFAM not only utilize their technical expertise in this area but also their knowledge of FRP manufacture. This combined know-how allows us to develop tailored technologies and processes with FlexPLAS® release film to meet customer requirements.