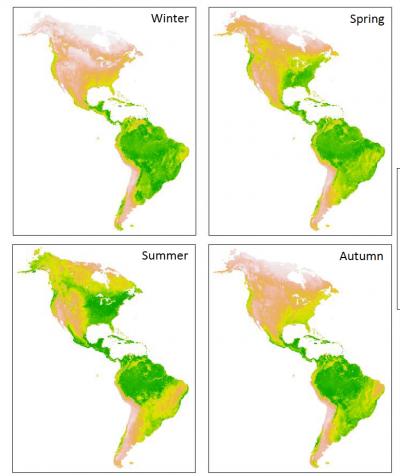 Animation showing vegetation greening throughout the Western Hemisphere during the course of a year.
Credit: Frank La Sorte, Cornell Lab of Ornithology

Continued climate change could spell disaster for many species.

A new study from the Cornell Lab of Ornithology confirms that most birds–but not all–synchronize their migratory movements with seasonal changes in vegetation greenness. This is the first study of its kind to cover the Western Hemisphere during the year-long life cycle of North American migratory birds that feed on vegetation, seeds, nectar, insects, or meat. The findings were published today in the Journal of Animal Ecology.

“As you might expect, migration synchronization with vegetation greenness is strongest for birds that eat vegetation, seeds, or both, during spring and autumn migration, but especially during spring,” says lead author Frank La Sorte at the Cornell Lab. “You could say they follow the ‘green wave’ north in the spring and then follow it in reverse during the fall, keeping pace with a wave that is retreating ahead of the North American winter.”

The “green wave” of maturing and dying vegetation is plainly visible in this animation based on data from the MODIS imaging sensors onboard the Terra and Aqua satellites. Vegetation greenness in Central and South America remains relatively stable except in the eastern portion of the continent. Animation by Frank La Sorte, Cornell Lab of Ornithology.

But the pattern does not hold for carnivores, such as hawks and eagles, in the West during either migration period. The evidence is also weak for synchronization among insect-eating birds during spring migration in eastern and central portions of the United States. Birds that rely on nectar–hummingbirds primarily–also showed looser ties to vegetation greenness in the West. The reason for the lack of synchronization for insect-eating birds in the East is a massive geographical barrier to migration: the Gulf of Mexico. Birds wintering in Central and South America cannot detect vegetation changes on the U.S. side of the Gulf in spring and vice versa in the fall.

Scientists used data from satellites to estimate the greenness of vegetation year round and cross-referenced that data with eBird observations for 230 North American migratory bird species from 2006 through 2018. eBird is the Lab’s worldwide bird observation reporting platform. So why does all this matter? Climate change.

“Our findings emphasize the need to better understand the environmental cues that regulate migratory behavior and the implications for migratory birds if these cues change,” La Sorte says. “Unchecked climate change means it’s more likely that there will be a mismatch–migratory birds during stopover or when arriving on their breeding or wintering grounds could miss the peak food supply–no matter what they eat.”

Funding for this study comes from the Wolf Creek Charitable Foundation and the National Science Foundation.