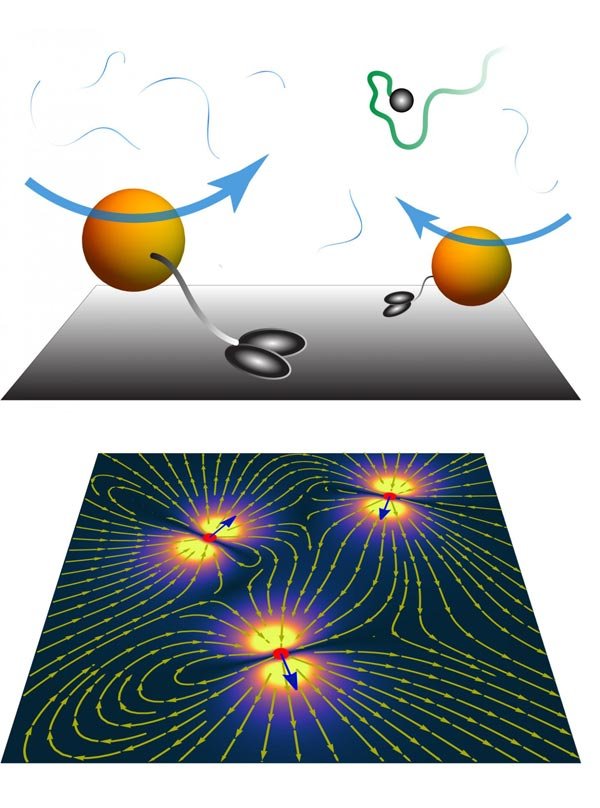 An active carpet made of molecular motors (top) generates strong flows, which enhances the diffusion of nearby particles as modeled by the resulting flow fields (bottom).
Credit: Arnold Mathijssen

New research provides insights into the process of diffusion in living systems, with implications from novel active coatings to understanding how pathogens are cleared from lungs.

A drop of food coloring slowly spreading in a glass of water is driven by a process known as diffusion. While the mathematics of diffusion have been known for many years, how this process works in living organisms is not as well understood.

Now, a study published in Nature Communications provides new insights on the process of diffusion in complex systems. The result of a collaboration between physicists at Penn, the University of Chile, and Heinrich Heine University Düsseldorf, this new theoretical framework has broad implications for active surfaces, such as ones found in biofilms, active coatings, and even mechanisms for pathogen clearance.

Diffusion is described by Fick’s laws: Particles, atoms, or molecules will always move from a region of high to low concentration. Diffusion is one of the most important ways that molecules move within the body. However, for the transport of big objects over large distances, standard diffusion becomes too slow to keep up.

“That’s when you need active components to help transport things around,” says study co-author Arnold Mathijssen. In biology, these actuators include cytoskeletal motors that move cargo vesicles in cells, or cilia that pump liquid out of human lungs. When many actuators accumulate on a surface, they are known as “active carpets.” Together, they can inject energy into a system in order to help make diffusion more efficient.

Mathijssen, whose research group studies the physics of pathogens, first became interested in this topic while studying biofilms with Francisca Guzmán-Lastra, an expert on the physics of active matter, and theoretical physicist Hartmut Löwen. Biofilms are another example of active carpets since they use their flagella to create “flows” that pump liquid and nutrients from their environment. Specifically, the researchers were interested in understanding how biofilms are able to sustain themselves when access to nutrients is limited. “They can increase their food uptake by creating flows, but this also costs energy. So, the question was: How much energy do you put in to get energy out?” says Mathijssen.

But studying active carpets is difficult because they don’t align neatly with Fick’s laws, so the researchers needed to develop a way to understand diffusion in these non-equilibrium systems, or ones that have added energy. “We thought that we could generalize these laws for enhanced diffusion, when you have systems that do not follow Fick’s laws but may still follow a simple formula that is widely applicable to many of these active systems,” Mathijssen says.

After figuring out how to connect the math needed to understand both bacterial dynamics and Fick’s laws, the researchers developed a model similar to the Stokes-Einstein equation, which describes the relationship with temperature and diffusion, and found that microscopic fluctuations could explain the changes they saw in particle diffusion. Using their new model, the researchers also found that the diffusion generated by these small movements is incredibly efficient, allowing bacteria to use just a small amount of energy to gain a large amount of food.

“We’ve now derived a theory that predicts the transport of molecules inside cells or close to active surfaces. My dream would be that these theories would be applied in different biophysical settings,” says Mathijssen. His new research lab at Penn will start working on follow-up experiments to test out these new models. They plan to study active diffusion both in biological and engineered microscopic systems.

Mathijssen, who is also involved on a project related to the spread of COVID-19 in food-processing facilities, says that the cilia in lungs are another important example of active carpets in biology, especially since they serve as the first line of defense against pathogens like COVID-19. He says, “That would be another very important thing to test, whether this theory of active carpets may be linked to the theory of pathogen clearance in the airways.”

This research was supported by the United States Department of Agriculture (USDA-NIFA AFRI grants 2020-67017-30776 and 2020-67015-32330) and Human Frontier Science Program Fellowship LT001670/2017 and an International Research Travel Award from the American Physical Society.