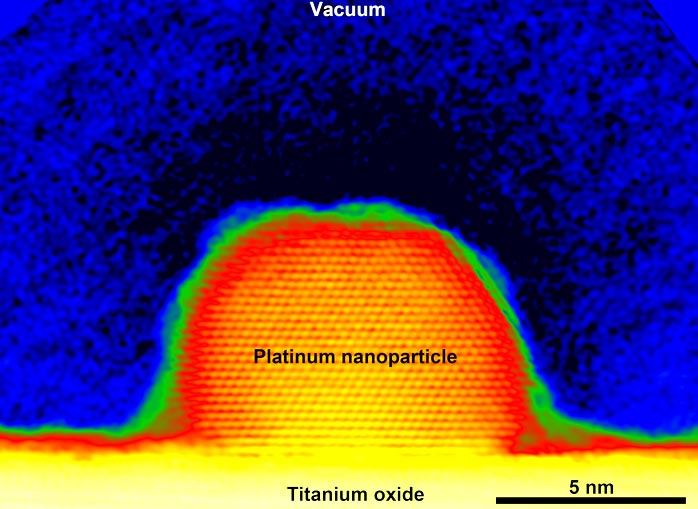 Ultrahigh sensitivity and precision electron holography measurements around a platinum nanoparticle like the one shown here have allowed scientists to count the net charge in a single catalyst nanoparticle with a precision of just one electron for the first time.
Credit: Murakami Lab, Kyushu University

Tenfold improvement in the sensitivity of electron holography reveals the net charge in a single platinum nanoparticle with a precision of just one electron, providing fundamental information for developing future catalysts.

If you often find yourself off by one when counting your socks after doing the laundry, you might want to sit down for this.

Scientists in Japan have now counted the number of extra—or missing—charges down to a precision of just one electron in single platinum nanoparticles having diameters only one-tenth those of common viruses.

This new process for precisely studying differences in net charge on metal nanoparticles will aid in the further understanding and development of catalysts for breaking down greenhouse and other harmful gases into fuels and benign gases or for efficiently producing ammonia needed for fertilizers used in agriculture.

Led by Kyushu University and Hitachi Ltd., the research team achieved this feat of extreme counting through hardware and software improvements that increased tenfold the sensitivity of a technique called electron holography.

While transmission electron microscopy uses a beam of electrons to observe materials down to the atomic level, electron holography utilizes the wave-like properties of electrons to probe electric and magnetic fields.

Interaction of an electron with fields causes a phase shift in its wave that can be identified by comparing it with a reference wave of an unaffected electron.

In the new work, the researchers focused their microscopes on single nanoparticles of platinum on a surface of titanium oxide, a combination of materials that is already known to act as a catalyst and speed up chemical reactions.

On average, the platinum nanoparticles had diameters of only 10 nm—so small that it would take nearly 100,000 to span one millimeter.

“While each particle contains a few tens of thousands of atoms of platinum, the addition or removal of just one or two negatively charged electrons causes significant changes in the behavior of the materials as catalysts,” says Ryotaro Aso, associate professor at Kyushu University’s Faculty of Engineering and first author on the paper in the journal Science reporting the work.

Measuring the fields just around a platinum nanoparticle—which vary depending on the imbalance of positive and negative charges in the particle—in an environment free of air, the researchers could determine the number of extra or missing electrons that are creating the fields.

Although the fields are too weak to observe with previous methods, the researchers improved sensitivity by using a state-of-the-art 1.2-MV atomic-resolution holography microscope developed and operated by Hitachi that reduces mechanical and electrical noise and then processing the data to further tease out the signal from the noise.

Developed by Osaka University’s Yoshihiro Midoh, one of the paper’s co-authors, the signal processing technique utilized the so-called wavelet hidden Markov model (WHMM) to reduce the noise without also removing the extremely weak signals of interest.

While the number of electrons per area has been previously reported by averaging over a large-area measurement of many particles, this is the first time scientists could measure a single electron difference in a single particle.

“By combining breakthroughs in microscopy hardware and signal processing, we are able to study phenomenon on increasingly smaller levels,” comments Yasukazu Murakami, professor at Kyushu University’s Faculty of Engineering and supervisor of the Kyushu U team.

“In this first demonstration, we measured the charge on a single nanoparticle in vacuum. In the future, we hope to overcome the challenges that currently prevent us from doing the same measurements in the presence of gas to get information in environments closer to actually applications.”

Kyushu University is one of Japan’s leading research-oriented institutes of higher education since its founding in 1911. Home to around 19,000 students and 8,000 faculty and staff, Kyushu U’s world-class research centers cover a wide range of study areas and research fields, from the humanities and arts to engineering and medical sciences. Its multiple campuses—including the largest in Japan—are located around Fukuoka City, a coastal metropolis on the southwestern Japanese island of Kyushu that is frequently ranked among the world’s most livable cities and historically known as a gateway to Asia.