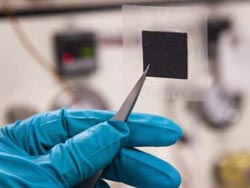 This is an example membrane -- a cost-efficient and durable alternative for fuel cells consisting of two electrodes with a clear membrane sandwiched between them.<br><br>Credit: Patrick Mansell<br>

“We have tried to break this paradigm of tradeoffs in materials (by improving) both the stability and the conductivity of this membrane at the same time, and that is what we were able to do with this unique polymeric materials design,” said Michael Hickner, associate professor of materials science and engineering.

In solid-state alkaline fuel cells, anion exchange membranes conduct negative charges between the device's cathode and anode — the negative and positive connections of the cell — to create useable electric power. Most fuel cells currently use membranes that require platinum-based catalysts that are effective but expensive.

Creating this alternative took some intuition and good fortune. In work spearheaded by Nanwen Li, a postdoctoral researcher in materials science and engineering, Hickner's team created several variations of the membrane, each with slightly different chemical compositions. They then ran each variation under simulated conditions to predict which would be optimal in an actual fuel cell. The researchers published their results in a recent issue of the Journal of the American Chemical Society.

Based on these initial tests, the group predicted that the membranes with long 16-carbon structures in their chemical makeup would provide the best efficiency and durability, as measured respectively by conductivity and long-term stability.

Chao-Yang Wang, William E. Diefenderfer Chair of Mechanical Engineering, and his team then tested each possibility in an operating fuel cell device. Yongjun Leng, a research associate in mechanical and nuclear engineering, measured the fuel cell's output and lifetime for each material variation.

Despite predictions, the membranes containing shorter 6-carbon structures proved to be much more durable and efficient after 60 hours of continuous operation.

“We were somewhat surprised…that what we thought was the best material in our lab testing wasn't necessarily the best material in the cell when it was evaluated over time,” said Hickner, who added that researchers are still trying to understand why the 6-carbon variation has better long-term durability than the 16-carbon sample in the fuel cell by studying the operating conditions of the cell in detail.

Because the successful membrane was so much more effective than the initial lab studies predicted, researchers are now interested in accounting for the interactions that the membranes experienced while inside the cell.

The Advanced Research Projects Agency-Energy at the U.S. Department of Energy, funded this project in collaboration with Proton OnSite, a leading membrane electrolyzer company based in Connecticut.