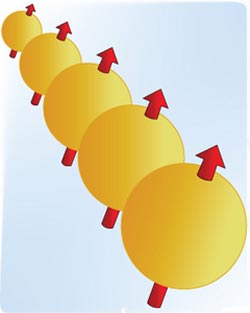 Sustaining a spin-polarized current, in which the spin (depicted as an arrow) of each electron (yellow) is aligned, is integral to advancing spintronic applications<br><br><br><br>Copyright : 2013 A*STAR Data Storage Institute<br>

Spintronics is a form of signal processing similar to that used in traditional electronics, but it takes advantage of a property of electrons known as spin. Spin is often visualized as an arrow about which the electron rotates, much like a top spinning around its axis. Generating a stream of electrons in which these 'arrows' are all parallel – a so-called spin-polarized current (see image) – is the foundation upon which spintronics is based. Imperfections in a material, however, can easily destroy polarization.

Simply applying an oscillating voltage across the device could help to maintain a spin-polarized current even in the presence of impurities, according to theoretical research by Seng Ghee Tan at the A*STAR Data Storage Institute, Singapore, and co©workers

Tan and his colleagues considered a two-dimensional electron gas: a system in which the electrons can move only in one plane. When a spin-polarized current flows through such a material, the spins interact with the electron's motion through an effect known as Rashba spin¨Corbit coupling. This makes the spins start to 'wobble' or precess: at first they point upwards but then point downwards, and this reduces the total spin polarization to zero. “We want to prolong the life span of a spin current in the channel by controlling the strength of the Rashba coupling,” says Tan. To this end, he and his team investigated a device, known as a spin-current rectifier, that lets a spin current flow with one particular polarization – upwards only, for example.

The researchers developed a simple mathematical equation that predicts the behavior of the spin current as an alternating voltage is applied across the device. Their model shows that when the frequency of the voltage is zero, the spin polarization goes back and forth as expected. “However, by increasing the frequency, we see an increasingly asymmetrical pattern of oscillation in favor of positive polarization,” explains Tan. “We call this a gradual process of rectification.”

Their approach can even suppress precessional motion entirely. When the external modulation frequency is much faster than the natural precessional frequency of the spins, known as the Larmor frequency, the spins have no time to change direction so remain pointing upwards. Consequently, the system maintains a spin-polarized current.

Once spin currents can be sustained, spintronics will have all the potential of electronics with the additional advantage of an extra degree of control. The spin-current rectifier investigated by Tan and his co-workers could therefore become a vital component in this future technology.