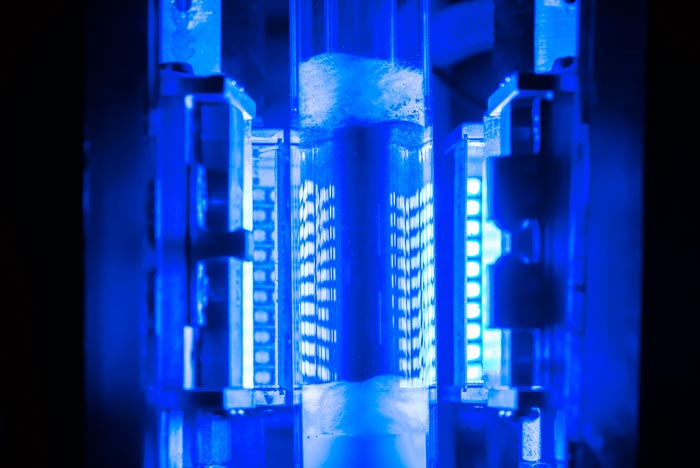 Rice University researchers have engineered a key light-activated nanomaterial for the hydrogen economy. Using only inexpensive raw materials, a team from Rice’s Laboratory for Nanophotonics, Syzygy Plasmonics Inc. and Princeton University’s Andlinger Center for Energy and the Environment created a scalable catalyst that needs only the power of light to convert ammonia into clean-burning hydrogen fuel.

The research is published online today in the journal Science.

The research follows government and industry investment to create infrastructure and markets for carbon-free liquid ammonia fuel that will not contribute to greenhouse warming. Liquid ammonia is easy to transport and packs a lot of energy, with one nitrogen and three hydrogen atoms per molecule. The new catalyst breaks those molecules into hydrogen gas, a clean-burning fuel, and nitrogen gas, the largest component of Earth’s atmosphere. And unlike traditional catalysts, it doesn’t require heat. Instead, it harvests energy from light, either sunlight or energy-stingy LEDs.

The pace of chemical reactions typically increases with temperature, and chemical producers have capitalized on this for more than a century by applying heat on an industrial scale. The burning of fossil fuels to raise the temperature of large reaction vessels by hundreds or thousands of degrees results in an enormous carbon footprint. Chemical producers also spend billions of dollars each year on thermocatalysts — materials that don’t react but further speed reactions under intense heating.

“Transition metals like iron are typically poor thermocatalysts,” said study co-author Naomi Halas of Rice. “This work shows they can be efficient plasmonic photocatalysts. It also demonstrates that photocatalysis can be efficiently performed with inexpensive LED photon sources.”

“This discovery paves the way for sustainable, low-cost hydrogen that could be produced locally rather than in massive centralized plants,” said Peter Nordlander, also a Rice co-author.

The best thermocatalysts are made from platinum and related precious metals like palladium, rhodium and ruthenium. Halas and Nordlander spent years developing light-activated, or plasmonic, metal nanoparticles. The best of these are also typically made with precious metals like silver and gold.

Following their 2011 discovery of plasmonic particles that give off short-lived, high-energy electrons called “hot carriers,” they discovered in 2016 that hot-carrier generators could be married with catalytic particles to produce hybrid “antenna-reactors,” where one part harvested energy from light and the other part used the energy to drive chemical reactions with surgical precision.

Halas, Nordlander, their students and collaborators have worked for years to find non-precious metal alternatives for both the energy-harvesting and reaction-speeding halves of antenna reactors. The new study is a culmination of that work. In it, Halas, Nordlander, Rice alumnus Hossein Robatjazi, Princeton engineer and physical chemist Emily Carter, and others show that antenna-reactor particles made of copper and iron are highly efficient at converting ammonia. The copper, energy-harvesting piece of the particles captures energy from visible light.

“In the absence of light, the copper-iron catalyst exhibited about 300 times lower reactivity than copper-ruthenium catalysts, which is not surprising given that ruthenium is a better thermocatalyst for this reaction,” said Robatjazi, a Ph.D. alumnus from Halas’ research group who is now chief scientist at Houston-based Syzygy Plasmonics. “Under illumination, the copper-iron showed efficiencies and reactivities that were similar to and comparable with those of copper-ruthenium.

Syzygy has licensed Rice’s antenna-reactor technology, and the study included scaled-up tests of the catalyst in the company’s commercially available, LED-powered reactors. In laboratory tests at Rice, the copper-iron catalysts had been illuminated with lasers. The Syzygy tests showed the catalysts retained their efficiency under LED illumination and at a scale 500 times larger than lab setup.

“This is the first report in the scientific literature to show that photocatalysis with LEDs can produce gram-scale quantities of hydrogen gas from ammonia,” Halas said. “This opens the door to entirely replace precious metals in plasmonic photocatalysis.”

“Given their potential for significantly reducing chemical sector carbon emissions, plasmonic antenna-reactor photocatalysts are worthy of further study,” Carter added. “These results are a great motivator. They suggest it is likely that other combinations of abundant metals could be used as cost-effective catalysts for a wide range of chemical reactions.”

Halas and Nordlander are Syzygy co-founders and hold an equity stake in the company.

The research was supported by the Welch Foundation (C-1220, C-1222), the Air Force Office of Scientific Research (FA9550-15-1-0022), Syzygy Plasmonics, the Department of Defense and Princeton University.

VIDEO is available at:

A reaction cell (left) and the photocatalytic platform (right) used on tests of copper-iron plasmonic photocatalysts for hydrogen production from ammonia at Syzygy Plasmonics in Houston. All reaction energy for the catalysis came from LEDs that produced light with a wavelength of 470 nanometers. (Credit: Syzygy Plasmonics, Inc.)

Measurement of ‘hot’ electrons could have solar energy payoff: https://news2.rice.edu/2011/05/05/measurement-of-hot-electrons-could-have-solar-energy-payoff/

Wasted Energy: What if we could make chemical reactions on an industrial scale much more energy efficient?: https://magazine.rice.edu/winter-2018/we-dont-know#wasted-energy

This release can be found online at https://news.rice.edu/news/2022/rice-labs-catalyst-could-be-key-hydrogen-economy.

Located on a 300-acre forested campus in Houston, Rice University is consistently ranked among the nation’s top 20 universities by U.S. News & World Report. Rice has highly respected schools of Architecture, Business, Continuing Studies, Engineering, Humanities, Music, Natural Sciences and Social Sciences and is home to the Baker Institute for Public Policy. With 4,240 undergraduates and 3,972 graduate students, Rice’s undergraduate student-to-faculty ratio is just under 6-to-1. Its residential college system builds close-knit communities and lifelong friendships, just one reason why Rice is ranked No. 1 for lots of race/class interaction and No. 1 for quality of life by the Princeton Review. Rice is also rated as a best value among private universities by Kiplinger’s Personal Finance.