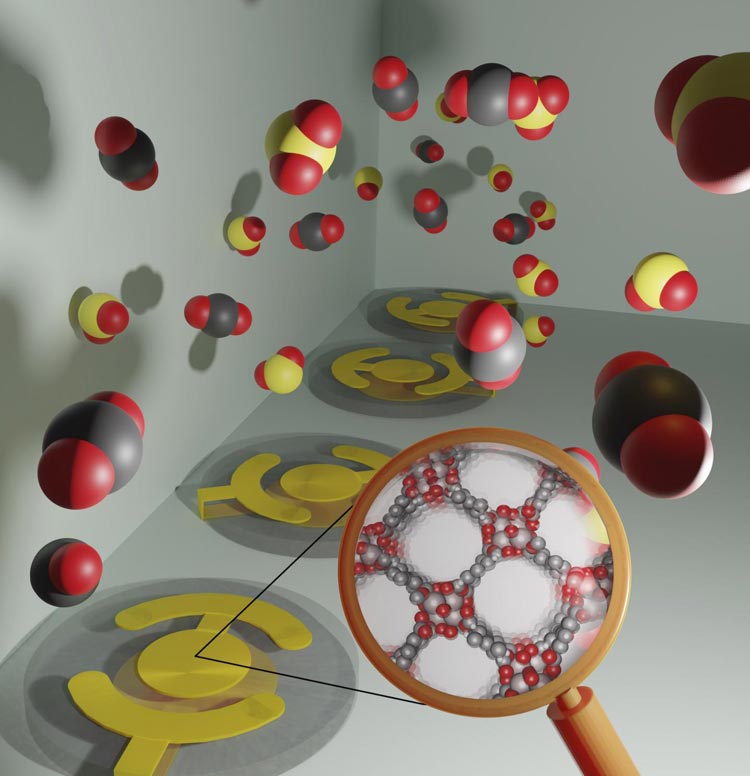 The research took aim at a critical yet understudied hurdle in using MOFs as gas sensors: Out of the billions of possible MOFs, how do you determine the right ones for building the optimal electronic nose?

MOFs have nanosized pores and selectively adsorb gases, similar to a sponge. They are ideal for use in sensor arrays because of their tunability, enabling engineers to use a diverse set of materials that allows an array of MOF-based sensors to deliver detailed information.

Depending on which components make up a gas, different amounts of the gas will adsorb in each MOF. That means the composition of a gas can be inferred by measuring the adsorbed gas in the array of MOFs using micro-scale balances.

The challenge is that all MOFs adsorb all gases – not to the same extent, but nevertheless the absence of perfect selectivity prevents an engineer from simply saying, “let's just dedicate this MOF to carbon dioxide, that one to sulfur dioxide, and another one to nitrogen dioxide.”

“Curating MOFs for gas sensor arrays is not that simple because each MOF in the array will appreciably adsorb all three of those gases,” Simon said.

“In our research, we created a mathematical framework that allows us, based on the adsorption properties of MOFs, to decide which combination of MOFs is optimal for a gas sensor array,” Simon said. “There will inevitably be some small errors in the measurements of the mass of adsorbed gas, and those errors will corrupt the prediction of the gas composition based on the sensor array response. Our model assesses how well a given combination of MOFs will prevent those small errors from corrupting the estimate of the gas composition.”

Though the research was primarily mathematical modeling, the scientists used experimental adsorption data in real MOFs as input, Simon said, adding that Chang is an experimentalist “who we are working with to make a real-life electronic nose to detect air pollutants.”

“We are currently seeking external funding together to bring this novel concept into physical realization,” Simon said. “Because of this paper, we now have a rational method to computationally design the sensory array, which encompasses simulating gas adsorption in the MOFs with molecular models and simulations to predict their adsorption properties, then using our mathematical method to screen the various combinations of MOFs for the most accurate sensor array.”

Meaning that instead of an experimental trial-and-error approach to decide which MOFs to use in a sensor array, engineers can use computational power to curate the best collection of MOFs for an electronic nose.

Another exciting application of such a nose could be diagnosing disease. The volatile organic compounds humans emit, such as through our breath, are filled with biomarkers for multiple diseases, and studies have shown that dogs — which have twice the number of different olfactory receptors as humans — can detect diseases with their nose.

Marvelous though they are, however, dogs' noses aren't as practical for widespread diagnostic use as a carefully crafted and manufactured sensor array would be.

Findings of the computational MOF research were published in ACS Applied Materials & Interfaces.