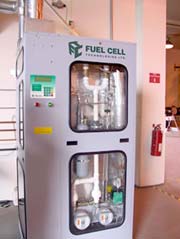 A five-kilowatt solid oxide fuel cell (SOFC) undergoing testing in Fairbanks has reached the 5,000-hour milestone since its start-up eight months ago. During each hour of operation the fuel cell produces approximately four kilowatts of electricity totaling 20,000 kilowatt hours for the duration, enough to power two average houses for a full year.

“Since the biggest questions surrounding fuel cells have been longevity and reliability, this is an exciting achievement in fuel cell technology and testing,” said Dennis Witmer, director of the University of Alaska Fairbanks Arctic Energy Technology Development Laboratory which is conducting the tests.

“We’re pleased with the performance of this unit and have used this successful field demonstration to build an entire second generation of systems,” said Gary Allen, director of sales for FCT. “The overall efficiency of the fuel cell is very encouraging.”

Fairbanks Natural Gas has been supplying the unit with natural gas in exchange for the electricity generated from it which they’ve used to power their building in south Fairbanks since last July.

“This has been a valuable test for future potential uses of natural gas,” said Dan Britton, president of FNG. “We’re pleased with its overall operation and it has provided an electrical cost savings.”

Fuel cells have long been touted as a way to provide reliable, affordable energy to remote areas of Alaska. The SOFC test is among $6 million in projects funded under recent proposals submitted to AETDL for funding by DOE’s Arctic Energy Office.