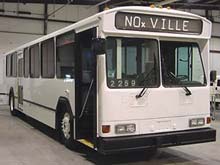 A bus in Indiana is the latest laboratory for MIT’s plasmatron reformer, a small device its developers believe could significantly cut the nation’s oil consumption as well as noxious emissions from a variety of vehicles.

The work will be the subject of an invited talk next Thursday, October 30, at a meeting of the American Physical Society’s Division of Plasma Physics in Albuquerque, NM.

The researchers and colleagues from industry report that the plasmatron, used with an exhaust treatment catalyst on a diesel engine bus, removed up to 90 percent of nitrogen oxides (NOx) from the bus’s emissions. Nitrogen oxides are the primary components of smog.

The plasmatron reformer also cut in half the amount of fuel needed for the removal process. “The absorption catalyst approach under consideration for diesel exhaust NOx removal requires additional fuel to work,” explained Daniel R. Cohn, one of the leaders of the team and head of the Plasma Technology Division at MIT’s Plasma Science and Fusion Center (PSFC). “The plasmatron reformer reduced that amount of fuel by a factor of two compared to a system without the plasmatron.”

Cohn noted that the plasmatron reformer also allowed the NOx absorption catalyst to be effective at the low exhaust temperatures characteristic of urban use.

These results, reported at a U.S. Department of Energy Diesel Engine Emissions Reduction (DEER) meeting in August, indicate that the plasmatron reformer, in conjunction with an NOx absorber catalyst, could be one of the most promising ways to meet stricter emissions limits for all heavy trucks and buses. The Environmental Protection Agency plans to institute the new limits by 2007.

“Diesel-engine vehicles generally do not have exhaust treatment systems,” Cohn said, adding that treating diesel exhaust is much more difficult than gasoline exhaust.

Under development for the last six years, the plasmatron is an onboard “oil reformer” that converts a variety of fuels into high-quality, hydrogen-rich gas. Adding a relatively modest amount of such gas to the gasoline powering a car or to a diesel vehicle’s exhaust is known to have benefits for cutting the emissions of pollutants. “Prior to the plasmatron reformer development, there was no attractive way to produce that hydrogen on board,” said Cohn.

His colleagues are Leslie Bromberg and Alexander Rabinovich of the PSFC; John Heywood, director of MIT’s Sloan Automotive Lab and the Sun Jae Professor of Mechanical Engineering; and Rudolf M. Smaling, a graduate student in the Engineering Systems Division. Smaling is an engineering manager from ArvinMeritor, a major automotive and heavy truck components company that has licensed the plasmatron technology from MIT. The bus engine tests were performed at the company’s facility in Columbus, Ind., by an ArvinMeritor team.

The team is finding that the device could make vehicles cleaner and more efficient, with a potentially significant impact on oil consumption.

“If widespread use of plasmatron hydrogen-enhanced gasoline engines could eventually increase the average efficiency of cars and other light-duty vehicles by 20 percent, the amount of gasoline that could be saved would be around 25 billion gallons a year,” Cohn said. That corresponds to around 70 percent of the oil that is currently imported by the United States from the Middle East.”

The Bush administration has made development of a hydrogen-powered vehicle a priority, Heywood noted. “That’s an important goal, as it could lead to more efficient, cleaner vehicles, but is it the only way to get there? Engines using plasmatron reformer technology could have a comparable impact, but in a much shorter time frame,” he said.

“Our objective is to have the plasmatron in production—and in vehicles—by 2010,” Smaling said. ArvinMeritor is working with a vehicle concept specialist company to build a proof-of-concept vehicle that incorporates the plasmatron in an internal combustion engine. “We’d like to have a driving vehicle in one and a half years to demonstrate the benefits,” Smaling said.

In the meantime, the team continues to improve the base technology. At the DEER meeting, Bromberg, for example, reported cutting the plasmatron’s consumption of electric power “by a factor of two to three.”

The work is funded by the Department of Energy’s FreedomCAR and Vehicle Technologies Program and by ArvinMeritor.