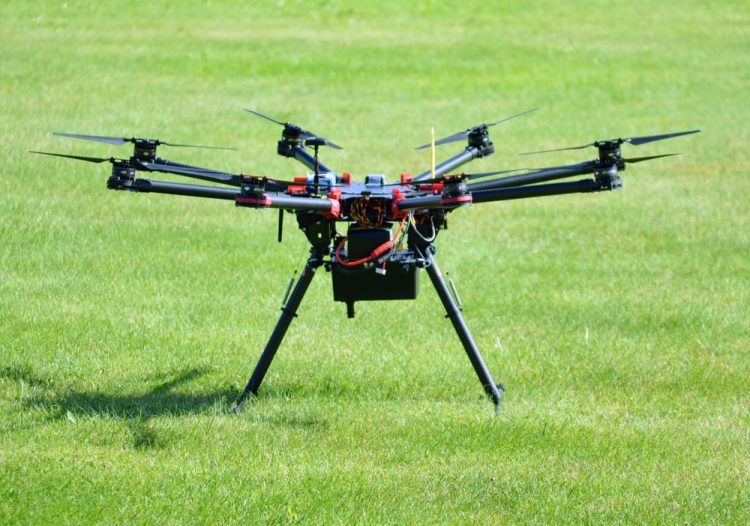 Researchers used 3-D printing to create hyperspectral imagers that are light enough to use on a drone. The imager is the small protrusion on the bottom of the drone's body. Credit: João Fortuna, Norwegian University of Science and Technology

In a new study, researchers used 3D printing and low-cost parts to create an inexpensive hyperspectral imager that is light enough to use onboard drones. They offer a recipe for creating these imagers, which could make the traditionally expensive analytical technique more widely accessible.

Hyperspectral imagers produce images like a traditional color camera but detect several hundred colors instead of the three detected by normal cameras. Each pixel of a hyperspectral image contains information covering the entire visible spectrum, providing data that can be used, for example, to automatically detect and sort objects or measure ocean color to map harmful algae blooms. Traditional hyperspectral imagers can cost tens of thousands of dollars and are very bulky and heavy.

In The Optical Society (OSA) journal Optics Express, the researchers detail how to make visible-wavelength hyperspectral imagers weighing less than half a pound for as little $700 (USD). They also demonstrate that these imagers can acquire spectral data from aboard a drone.

“The instruments we made can be used very effectively on a drone or unmanned vehicle to acquire spectral images,” said research team leader Fred Sigernes of University Centre in Svalbard (UNIS), Norway. “This means that hyperspectral imaging could be used to map large areas of terrain, for example, without the need to hire a plane or helicopter to carry an expensive and large instrument.”

A desktop 3D printer greatly eased the process of making the custom optics holders needed for the imagers. “Making items in metal is time consuming and can be very expensive,” said Sigernes. “However, 3D printing with plastic is inexpensive and very effective for making even complex parts, such as the piece needed to hold the grating that disperses the light. I was able to print several versions and try them out.”

The hyperspectral imagers created by the researchers employ what is known as the push-broom technique, which uses precise line-scanning to build up a spectral image. The researchers added a stabilization system to the setup so that a drone's movement would not distort the image as it was being generated.

The researchers made several prototypes by using 3D printing to create plastic holders that precisely position small, lightweight commercially available cameras and optical components. They tested one of the instruments onboard an octocopter drone equipped with a two-axis electronic stabilizing system. The hyperspectral imager performed well and was able to detect landscape features such as vegetation and bodies of water.

The researchers also performed handheld tests with the hyperspectral imagers and three-axis electronic stabilizing systems. For one experiment, they swept the imager across a computer screen displaying a fruit collection, acquiring 571 spectrograms in 22 seconds.

These feasibility tests showed that 3D printing is accurate enough to produce prototype parts for optical systems. The printed plastic parts were light weight and strong enough to keep the overall system light and small, which is important for use with drones. After testing, metal versions of 3D printed parts could be ordered if desired to create imagers that would be more durable.

Although the new imagers don't provide the sensitivity of traditional hyperspectral imagers, their performance is sufficient for mapping terrain or detecting ocean color in daylight. The researchers are now working to improve sensitivity by making slightly larger versions of the instruments that would still be small and light enough for use on drones. Improving the sensitivity of the imagers will provide higher quality data.

“There are many ways to use data acquired by hyperspectral imagers,” said Sigernes. “By lowering the cost of these instruments, we hope that more people will be able to use this analytical technique and develop it further.”

Optics Express reports on new developments in all fields of optical science and technology every two weeks. The journal provides rapid publication of original, peer-reviewed papers. It is published by The Optical Society and edited by Andrew M. Weiner of Purdue University. Optics Express is an open-access journal and is available at no cost to readers online at: OSA Publishing.