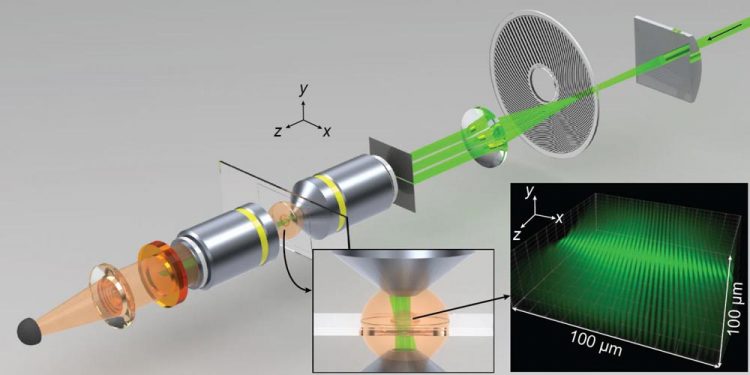 Optical microscopy experts at Colorado State University are once again pushing the envelope of biological imaging.

The work, with co-authorship by Randy Bartels, professor of electrical and computer engineering, and former postdoctoral researcher David Winters, has been published in Optica, the journal of the Optical Society of America. They named their new microscope CHIRPT: Coherent Holographic Image Reconstruction by Phase Transfer.

Field and other optics scientists work in a world of tradeoffs. For example: an advanced deep-tissue imaging technique called multiphoton fluorescence microscopy employs a short, bright laser pulse focused tight to one spot, and the fluorescence intensity from that one spot is recorded. Then, the laser moves to the next spot, then the next, to build up high-resolution 3D images. The technique offers subcellular detail, but it's relatively slow because it illuminates only one tiny spot at a time.

Other techniques, like spinning disk confocal microscopy, are faster because they shine light on multiple spots, not just one, and they scan simultaneously over a larger area. But unlike multiphoton, these techniques require collecting an image with a camera. As a result, fluorescent light emitted from the specimen is blurred on the camera, leading to loss in resolution, and with it, subcellular detail.

Call them greedy, but Field and colleagues want it all.

Their goal is working around each of these limitations – speed, resolution, size of field – to break through established boundaries in light microscopy.

Field and Bartels' new microscope builds upon a previously published technique, and permits digital re-focus of fluorescent light. It illuminates not one point, but multiple points by harnessing delocalized illumination spread over a large area. The physical principles they are using are similar to holography, in which scattered light is used to build a 3-D image.

Using a large illumination field, followed by back-end signal processing, the microscope can define distinct light modulation patterns of many points within the field of view. It builds up a 3-D image by combining the signals from all those distinct patterns.

“The idea is that you have a fluorophore at any point in the specimen, and the temporal structure of its fluorescence will be distinguishable from all others,” Field said. “So you can have this huge array of fluorophores, and just with this single-pixel detector, you can tell where every one of them is in that 2D field.”

So what does this new technique allow? Deep-tissue images in three dimensions, with better depth of field than comparable techniques. Depth of field, like in photography, means background images are in sharp focus along with the main image. And the CSU researchers can work at 600 frames per second, which is many times faster than established techniques.

With their new microscope, images can also be post-processed to remove aberrations that obscure the object of interest. It's akin to being able to focus a picture after it's been taken.

The CHIRPT microscope could allow biomedical researchers to produce sharp, 3-D images of cells or tissue over a much larger volume than conventional fluorescence microscopy methods allow. It could lead to things like imaging multicellular processes in real time that, with a conventional light microscope, could only be seen one cell at a time.