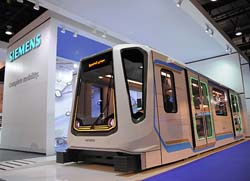 The highlight at the Siemens stand at the UITP in Dubai: a mock-up of the Inspiro metro.<br>

Engineers at Siemens Mobility relied on a lightweight design with aluminum profiles while developing the rail vehicle.

As a result, a six-car train is around six tons (or more than three percent) lighter than a comparable unit. The trains also use less energy and can transport more passengers.

Transit companies have the option of equipping the trains with additional energy-saving systems, such as those that control air conditioners with carbon-dioxide sensors or utilize energy-efficient LED lighting systems. What’s more, the Inspiro can be almost fully recycled after its roughly 40-year service life. The metro operating company in Warsaw will begin taking delivery of the first 35 Inspiro trains in the fall of 2012.

Numerous measures were undertaken to reduce the weight of the Inspiro. The front end of the cars alone, which houses the couplings, weighs 500 kilograms less than before. Its design is based on the use of light aluminum profiles. To identify areas in which fewer materials could be used without limiting functionality, the entire car body was computer analyzed by means of the finite element method.

Certain components in the cars themselves were made as multifunctional as possible — for example, parts of the ceiling also serve as cable ducts. In a further effort to reduce weight, air ducts are made of light textiles rather than the metal previously used, while a new type of cork-aluminum floor weighs 30 percent less than before, acts as a noise dampener, and also provides better heat insulation. Measures taken into account as early as the design phase form the basis for the train’s extremely high recycling rate of 95 percent, which Siemens Mobility has already demonstrated in the Oslo subway.

The Inspiro serves as a platform for subway trains that meet the different standards prevalent throughout Europe. The trains can consist of between three and eight cars and be equipped with different motors. In addition, the length, width, and height of the cars can be varied in line with existing infrastructure like tunnels and subway platforms. The Inspiro concept, which also reduces development times and costs, is part of Siemens’ Environmental Portfolio, with which the company generated about €30 billion in sales in 2011.