Home / Power and Electrical Engineering / Efficient conversion from spin currents to charge currents in a superconductor
24.06.2015

Efficient conversion from spin currents to charge currents in a superconductor 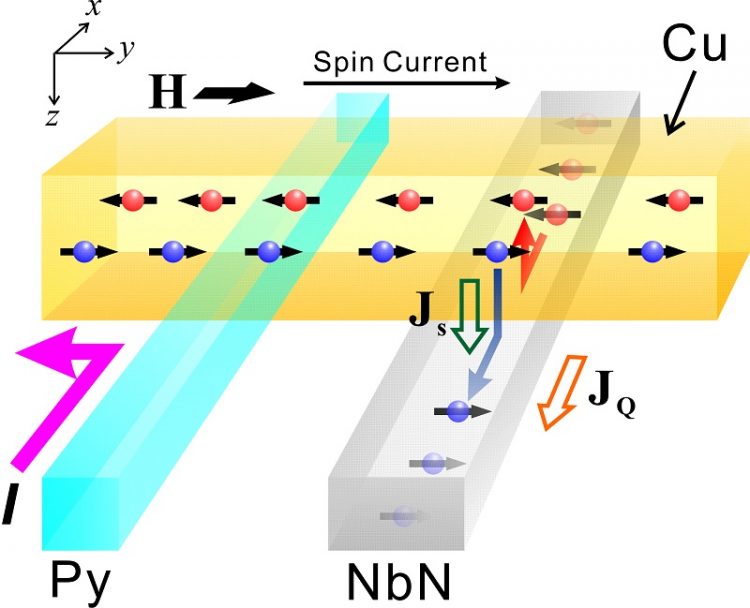 Schematic illustration of the device for measuring the SHE in a superconductor Spin injection current (I) between the ferromagnet (Py) and nonmagnet (copper: Cu) generates pure spin currents (JS) in the copper. Pure spin currents flow through the copper into a superconductor (niobium nitride: NbN), and are converted into charge currents (JQ) via the SHE inside the niobium nitride. Copyright : © 2015 Taro Wakamura

Spintronics, or electronics exploiting electron spin, is a research field that has been attracting growing interest in recent decades. It enables us to transmit and manipulate information with lower energy consumption owing to suppression of the Joule heating effect by using pure spin currents, a flow of electrons’ spin angular momentum without any charge flow.

Pure spin currents can be generated and detected via the spin Hall effect (SHE). The amplitude of the SHE depends on the material. A larger SHE indicates more efficient conversion between charge current and spin current, thus many studies have been carried out to discover materials which exhibit a larger SHE.

Whereas normal metals such as platinum or tungsten are regarded as promising candidates for obtaining large SHE, little attention has been paid to SHE in superconductors.

Professor Otani’s research group in the Institute for Solid State Physics has reported the first observation of SHE in a superconductor. The group prepared a device using niobium nitride, and measured the SHE in the superconducting and normal states.

Exploiting the unconventional electronic character of superconductors, the SHE in the superconducting state becomes more than 2,000 times larger than that in the normal state.