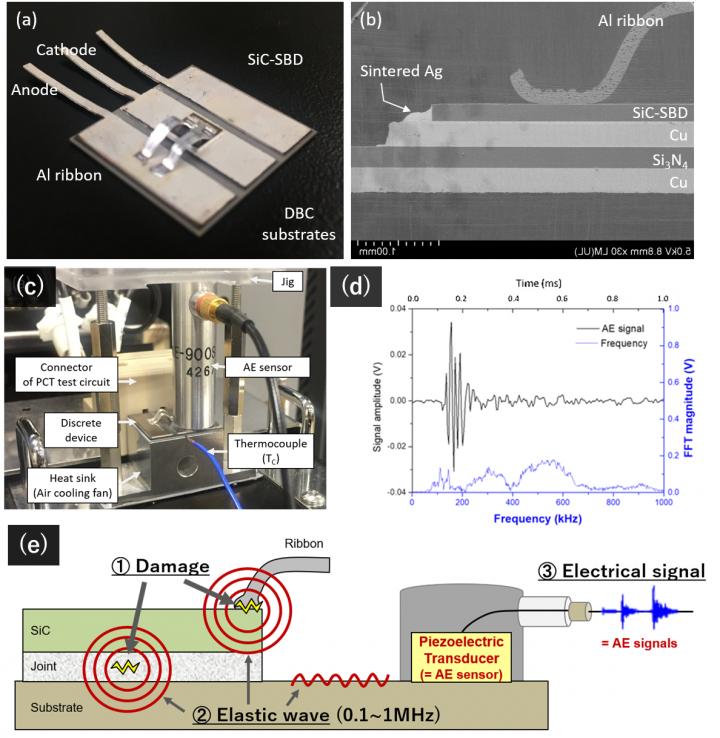 Researchers from Osaka University use non-destructive acoustic monitoring to identify the earliest stages of failure in silicon carbide power electronics, which will help in the design of more-durable power devices.

In a study recently published in IEEE Transactions on Power Electronics, researchers from Osaka University monitored in real time the propagation of cracks in a silicon carbide Schottsky diode during power cycling tests. The researchers used an analysis technique, known as acoustic emission, which has not been previously reported for this purpose.

During the power cycling test, the researchers mimicked repeatedly turning the device on and off, to monitor the resulting damage to the diode over time. Increasing acoustic emission corresponds to progressive damage to aluminum ribbons affixed to the silicon carbide Schottsky diode. The researchers correlated the monitored acoustic emission signals to specific stages of device damage that eventually led to failure.

“A transducer converts acoustic emission signals during power cycling tests to an electrical output that can be measured,” explains lead author ChanYang Choe. “We observed burst-type waveforms, which are consistent with fatigue cracking in the device.”

The traditional method of checking whether a power device is damaged is to monitor anomalous increases in the forward voltage during power cycling tests. Using the traditional method, the researchers found that there was an abrupt increase in the forward voltage, but only when the device was near complete failure. In contrast, acoustic emission counts were much more sensitive. Instead of an all-or-none response, there were clear trends in the acoustic emission counts during power cycling tests.

To date, there has been no sensitive early-warning method for detecting fatigue cracks that lead to complete failure in silicon carbide Schottsky diodes. Acoustic emission monitoring, as reported here, is such a method. In the future, this development will help researchers determine why silicon carbide devices fail, and improve future designs in common and advanced technologies.

Osaka University was founded in 1931 as one of the seven imperial universities of Japan and is now one of Japan’s leading comprehensive universities with a broad disciplinary spectrum. This strength is coupled with a singular drive for innovation that extends throughout the scientific process, from fundamental research to the creation of applied technology with positive economic impacts. Its commitment to innovation has been recognized in Japan and around the world, being named Japan’s most innovative university in 2015 (Reuters 2015 Top 100) and one of the most innovative institutions in the world in 2017 (Innovative Universities and the Nature Index Innovation 2017). Now, Osaka University is leveraging its role as a Designated National University Corporation selected by the Ministry of Education, Culture, Sports, Science and Technology to contribute to innovation for human welfare, sustainable development of society, and social transformation. Website: https://resou.osaka-u.ac.jp/en/top