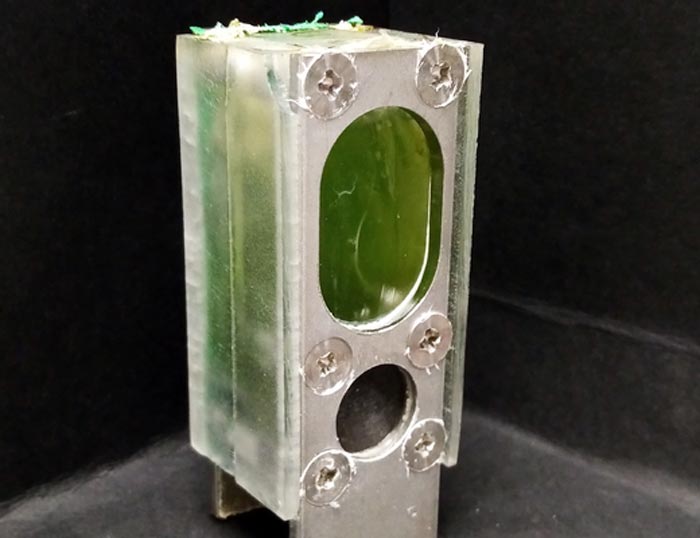 This system, containing blue-green algae, powered a microprocessor continuously for a year using nothing but ambient light and water.
Credit: Paolo Bombelli

Researchers have used a widespread species of blue-green algae to power a microprocessor continuously for a year – and counting – using nothing but ambient light and water. Their system has potential as a reliable and renewable way to power small devices.

The system, comparable in size to an AA battery, contains a type of non-toxic algae called Synechocystis that naturally harvests energy from the sun through photosynthesis. The tiny electrical current this generates then interacts with an aluminium electrode and is used to power a microprocessor.

The system is made of common, inexpensive and largely recyclable materials. This means it could easily be replicated hundreds of thousands of times to power large numbers of small devices as part of the Internet of Things. The researchers say it is likely to be most useful in off-grid situations or remote locations, where small amounts of power can be very beneficial.

“The growing Internet of Things needs an increasing amount of power, and we think this will have to come from systems that can generate energy, rather than simply store it like batteries,” said Professor Christopher Howe in the University of Cambridge’s Department of Biochemistry, joint senior author of the paper.

He added: “Our photosynthetic device doesn’t run down the way a battery does because it’s continually using light as the energy source.”

In the experiment, the device was used to power an Arm Cortex M0+, which is a microprocessor used widely in Internet of Things devices. It operated in a domestic environment and semi-outdoor conditions under natural light and associated temperature fluctuations, and after six months of continuous power production the results were submitted for publication.

The study is published today in the journal Energy & Environmental Science.

“We were impressed by how consistently the system worked over a long period of time – we thought it might stop after a few weeks but it just kept going,” said Dr Paolo Bombelli in the University of Cambridge’s Department of Biochemistry, first author of the paper.

The algae does not need feeding, because it creates its own food as it photosynthesises. And despite the fact that photosynthesis requires light, the device can even continue producing power during periods of darkness. The researchers think this is because the algae processes some of its food when there’s no light, and this continues to generate an electrical current.

The Internet of Things is a vast and growing network of electronic devices – each using only a small amount of power – that collect and share real-time data via the internet. Using low-cost computer chips and wireless networks, many billions of devices are part of this network – from smartwatches to temperature sensors in power stations. This figure is expected to grow to one trillion devices by 2035, requiring a vast number of portable energy sources.

The researchers say that powering trillions of Internet of Things devices using lithium-ion batteries would be impractical: it would need three times more lithium than is produced across the world annually. And traditional photovoltaic devices are made using hazardous materials that have adverse environmental effects.

The work was a collaboration between the University of Cambridge and Arm, a company leading the design of microprocessors. Arm Research developed the ultra-efficient Arm Cortex M0+ testchip, built the board, and set up the data-collection cloud interface presented in the experiments.