Home / Physics and Astronomy / What happens when we heat the atomic lattice of a magnet all of a sudden?
18.07.2018

What happens when we heat the atomic lattice of a magnet all of a sudden? 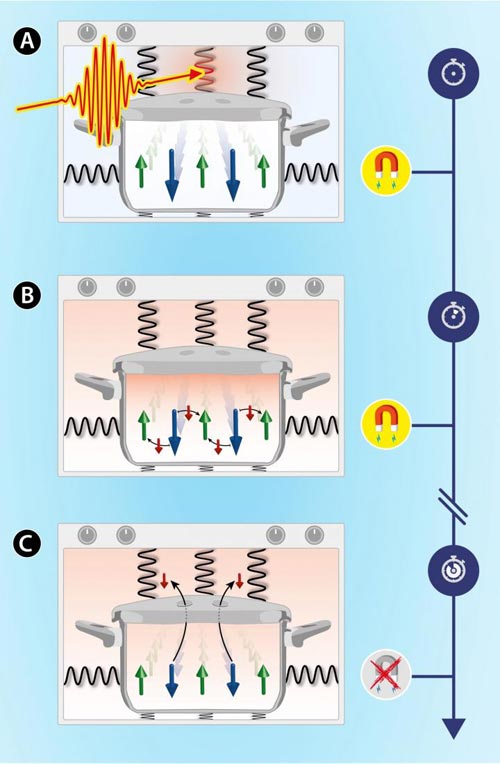 (A) A ferrimagnet consists of two spin sorts of opposite orientation (green and blue arrows). In the experiment, the atomic lattice of the ferrimagnet is heated by an extremely short terahertz laser pulse. This situation is analogous to heating the air (=atomic lattice) inside an oven that contains a pot with water (=spins). (B) Heat is transferred into the spin system and decreases the magnetization of each spin type by exactly the same amount. This process arises because spin is transferred from the blue to the green spin sort. Thus, the magnet is heated without changing its total magnetization! In the pot analogy, heat is transferred from the air outside the pot to the water inside. While the amount of water in the pot has not changed, an overpressure has built up. (C) Finally, the hot spins release their overpressure to the atomic lattice, thereby reducing the total magnetization. In the analogy, water overpressure is released through little leaks in the pot lid. Credit: Fritz Haber Institute Berlin

When an insulating ferrimagnet is heated, the heat is first deposited in the atomic lattice which causes the atoms to move randomly around their cold positions. Finally, part of the heat also causes random rotation (precession) of the spins around their cold direction. Thus, magnetic order gets lost; the total magnetization (M1-M2) decreases and eventually vanishes if the temperature of the ferrimagnet exceeds a critical temperature, the so-called Curie temperature.

Although this process is of fundamental importance, its dynamics are not well understood. Even for the ferrimagnet yttrium iron garnet (YIG), one of the most intensely researched ferrimagnets, it is unknown how long it takes until the heated atomic lattice and the cold magnetic spins reach equilibrium with each other. Previous estimates of this time scale differ from each other by a factor of up to one million.

A team of scientists from Berlin (Collaborative Research Center / Transregio 227 Ultrafast Spin Dynamics, Fritz Haber Institute and Max Born Institute), Dresden (Helmholtz Center), Uppsala (Sweden), St. Petersburg (Russia), and Sendai (Japan) have now revealed the elementary steps of this process. “To instantaneously and exclusively heat up the atomic lattice of a YIG film, we use a very specific and novel kind of stimulus: ultrashort bursts of laser light at terahertz frequencies.

With a subsequently arriving visible laser pulse, we can then step-by-step trace the evolution of the initially cold magnetic spins. Essentially, we record a stop-motion movie of how the magnetization evolves.” says Sebastian Maehrlein, who conducted the experiments.

His colleague Ilie Radu from summarizes: “Our observations are striking. We found that sudden heating of the atomic lattice reduces the magnetic order of the ferrimagnet on two distinct time scales: an incredibly fast scale of only 1 ps and a 100,000 times slower scale of 100 ns.”

These two time scales can be understood in analogy to water in a closed pot that is put into a hot oven. The hot air of the oven corresponds to the hot atomic lattice whereas the magnetic spins correspond to the water inside the pot (see panel A). Once the atomic lattice is heated by the terahertz laser burst, the enhanced random oscillations of the atoms lead to a transfer of magnetic order from spin type 1 to spin type 2.

Therefore, both the magnetic moments M1 (blue arrows in panel B) and M2 (green arrows) are reduced by exactly the same amount (red arrows). This process evolves on the fast time scale, and the atomic spins are forced to heat up while leaving the total magnetization M1-M2 unchanged, just like water in a closed pot that has to keep its volume.

We know, however, that a heated ferrimagnet not only aims at reducing M1 and M2, but also its total magnetization M1-M2. To do so, part of the spin must be released to the atomic lattice. This situation is again completely analogous to the hot water in a closed pot: the pressure inside the pot increases but is slowly released to the outside through little leaks in the lid (see panel C). This leakage of angular momentum to the atomic lattice is exactly what happens in the ferrimagnet through weak couplings between spins and lattice.

“We now have a clear picture of how the hot atomic lattice and the cold magnetic spins of a ferrimagnetic insulator equilibrate with each other.” says Ilie Radu. The international team of researchers discovered that energy transfer proceeds very quickly and leads to a novel state of matter in which the spins are hot but have not yet reduced their total magnetic moment.

This “spin overpressure” is released through much slower processes that permit leakage of angular momentum to the lattice. “Our results are also relevant for applications in data storage.” Sebastian Maehrlein adds. â€œThe reason is simple. Whenever we want to switch the value of a bit between 0 to 1 in a magnetic storage medium, angular momentum and energy have to finally be transferred between atomic lattice and spins.”