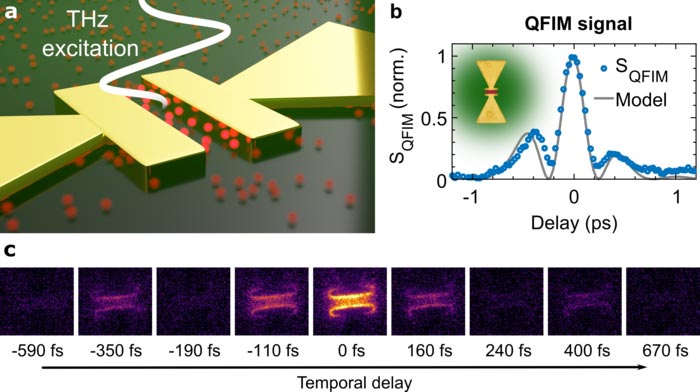 a, Local electric fields inside a bowtie antenna are driven by an incident THz waveform. Femtosecond sampling pulses excite a layer of quantum dots covering the sample. The luminescence depends on the momentary THz field due to the quantum-confined Stark effect, enabling the microscopy of electric near-fields via imaging of visible photons. b, The QFIM signal in the bowtie gap resolves the near-field evolution, verified by electromagnetic simulations. c, QFIM snapshots of the bowtie structure at different sampling delays display 1.5 oscillation cycles of the near-field.
Credit by Moritz B. Heindl, Nicholas Kirkwood, Tobias Lauster, Julia A. Lang, Markus Retsch, Paul Mulvaney, and Georg Herink

Microscopic electric fields govern a remarkable variety of phenomena in condensed matter and their ultrafast evolutions drive plasmonics, phononics and highspeed nanoelectronics. Access to high-frequency electric waveforms is of crucial importance to diverse disciplines in nanoscience and technology, yet, microscopic measurements are still severely limited.

In a new paper published in Light: Science & Applications, a team of scientists, led by Prof. Georg Herink from the University of Bayreuth, Germany, and co-workers from the University of Melbourne, Australia, has introduced a new THz microscope for imaging ultrafast electric waveforms encoded in the visible luminescence of nanocrystal probes. Strong electric fields modulate the emission yield of nanocrystals, thus, enable the detection of THz near-field waveforms by microscopy of visible photons in the far-field.

The researchers generated ultrafast electric fields inside gold structures using intense Terahertz pulses. A layer of semiconductor nanocrystals covering the samples is excited by ultrashort visible pulses and shows modulated visible emission depending on the momentary local THz electric field. Fundamentally, this probing of electric fields via luminescence yield is enabled by the quantum-confined Stark effect in quantum dots, generating the contrast mechanism of the scheme termed Quantum-Probe Field Microscopy (QFIM). While scanning the temporal delay between THz excitation and optical pulses, an optical fluorescence microscope captures snapshots of the modulated local emission and generates movies of the local field evolution.

Using QFIM, the researchers were able to resolve the near-fields inside a THz-bowtie antenna with sub-cycle temporal resolution. “We image ultrafast local near-fields significantly below the diffraction limit ­– with a resolution below one hundredth of the THz wavelength. Yet, the ultimate resolution limit of our method is still not reached and can be further refined, for example by super-resolution fluorescence microscopy.”, highlights the first author of the study, Moritz Heindl.

In particular, the researchers observed the excitation and propagation of THz-wavepackets inside a waveguide structure consisting of a sub-wavelength micro-slit.

“Such spatially confined surface propagations of electric fields have the potential to accelerate future microelectronics. Both linear and nonlinear effects inside electronic materials can be harnessed to control microscopic fields and, thus, to process ultrafast electronic signals on the fly,” says Herink. Applying the ultrafast microscope, the researchers envision microscopic insights into the inner workings of ultrafast nanocircuits that can be imaged and manipulated during operation.