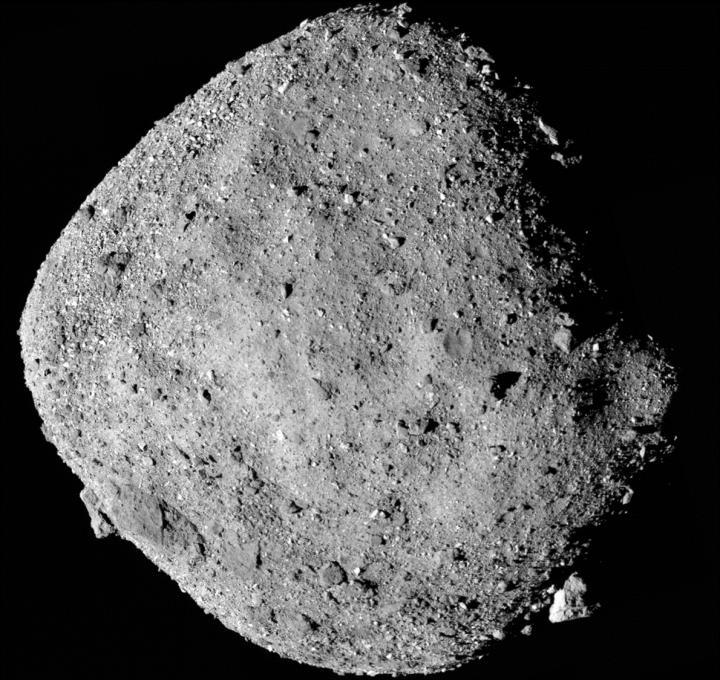 This mosaic image of asteroid Bennu is composed of 12 PolyCam images collected on Dec. 2 by the OSIRIS-REx spacecraft from a range of 15 miles (24 km). Credit: NASA/Goddard/University of Arizona Usage Restrictions: This visual may only be used in conjunction with reporting on or posting of this news release. Credit must be given as indicated.

From August through early December, the OSIRIS-REx spacecraft aimed three of its science instruments toward Bennu and began making the mission's first observations of the asteroid. During this period, the spacecraft traveled the last 1.4 million miles (2.2 million km) of its outbound journey to arrive at a spot 12 miles (19 km) from Bennu on Dec. 3. The science obtained from these initial observations confirmed many of the mission team's ground-based observations of Bennu and revealed several new surprises.

Team members of the mission, which is led by the University of Arizona, presented the results at the Annual Fall Meeting of the American Geophysical Union, or AGU, in Washington, D.C. on Dec. 10.

In a key finding for the mission's science investigation, data obtained from the spacecraft's two spectrometers, the OSIRIS-REx Visible and Infrared Spectrometer (OVIRS) and the OSIRIS-REx Thermal Emissions Spectrometer (OTES), reveal the presence of molecules that contain oxygen and hydrogen atoms bonded together, known as “hydroxyls.”

The team suspects that these hydroxyl groups exist globally across the asteroid in water-bearing clay minerals, meaning that at some point, the rocky material interacted with water. While Bennu itself is too small to have ever hosted liquid water, the finding does indicate that liquid water was present at some time on Bennu's parent body, a much larger asteroid.

“This finding may provide an important link between what we think happened in space with asteroids like Bennu and what we see in the meteorites that scientists study in the lab,” said Ellen Howell, senior research scientist at the UA's Lunar and Planetary Laboratory (LPL) and a member of the mission's spectral analysis group. “It is very exciting to see these hydrated minerals distributed across Bennu's surface, because it suggests they are an intrinsic part of Bennu's composition, not just sprinkled on its surface by an impactor.”

“The presence of hydrated minerals across the asteroid confirms that Bennu, a remnant from early in the formation of the solar system, is an excellent specimen for the OSIRIS-REx mission to study the composition of primitive volatiles and organics,” said Amy Simon, OVIRS Deputy Instrument Scientist at NASA Goddard Space Flight Center.

Soon after the asteroid later named Bennu was discovered in 1999, Nolan's group used the Arecibo Observatory in Puerto Rico to gather clues about its size, shape and rotation by bouncing radar waves off of it during one of its close approaches to Earth, about five times the distance between Earth and the moon.

“Radar observations don't give us any information about colors or brightness of the object, so it is really interesting to see the asteroid up close through the eyes of OSIRIS-REx,” Nolan said. “As we are getting more details, we are figuring out where the craters and boulders are, and we were very pleasantly surprised that virtually every little bump we saw in our radar image back then is actually really there.”

The mission team used this ground-based Bennu model when designing the OSIRIS-REx mission. The accuracy of the model means that the mission, spacecraft, and planned observations were appropriately designed for the tasks ahead at Bennu.

One outlier from the predicted shape model is the size of the large boulder near Bennu's south pole. The ground-based shape model calculated this boulder to be at least 33 feet (10 meters) in height. Preliminary calculations from OCAMS observations show that the boulder is closer to 164 feet (50 meters) in height, with a width of approximately 180 feet (55 meters).

As expected, the initial assessment of Bennu's regolith indicates that the surface of Bennu is a mix of very rocky, boulder-filled regions and a few relatively smooth regions that lack boulders. However, the quantity of boulders on the surface is higher than was expected. The team will make further observations at closer ranges to more accurately assess where a sample can be taken on Bennu for later return to Earth.

“Our initial data show that the team picked the right asteroid as the target of the OSIRIS-REx mission. We have not discovered any insurmountable issues at Bennu so far,” said Dante Lauretta, OSIRIS-REx principal investigator and professor of planetary science and cosmochemistry at LPL. “The spacecraft is healthy and the science instruments are working better than required. It is time now for our adventure to begin.”

“What used to be science fiction is now a reality,” said UA President Robert C. Robbins. “Our work at Bennu brings us a step closer to the possibility of asteroids providing astronauts on future missions into the solar system with resources like fuel and water.”

The mission is currently performing a preliminary survey of the asteroid, flying the spacecraft in passes over Bennu's north pole, equator and south pole at ranges as close as 4.4 miles (7 km) to better determine the asteroid's mass. This survey also provides the first opportunity for the OSIRIS-REx Laser Altimeter (OLA), an instrument contributed by the Canadian Space Agency, to make observations now that the spacecraft is in proximity to Bennu. The spacecraft's first orbital insertion is scheduled for Dec. 31, and OSIRIS-REx will remain in orbit until mid-February 2019, when the mission transitions into the next survey phase. During this first orbital phase, the spacecraft will orbit the asteroid at a range of 0.9 miles (1.4 km) to 1.24 miles (2 km) from the center of Bennu – setting two new records for the smallest body ever orbited by a spacecraft and the closest orbit of a planetary body by any spacecraft.

NASA's Goddard Space Flight Center in Greenbelt, Maryland, provides overall mission management, systems engineering and the safety and mission assurance for OSIRIS-REx. Dante Lauretta of the University of Arizona, Tucson, is the principal investigator, and the University of Arizona also leads the science team and the mission's science observation planning and data processing. Lockheed Martin Space Systems in Denver built the spacecraft and is providing flight operations. Goddard and KinetX Aerospace are responsible for navigating the OSIRIS-REx spacecraft. OSIRIS-REx is the third mission in NASA's New Frontiers Program. NASA's Marshall Space Flight Center in Huntsville, Alabama, manages the agency's New Frontiers Program for the Science Mission Directorate in Washington.