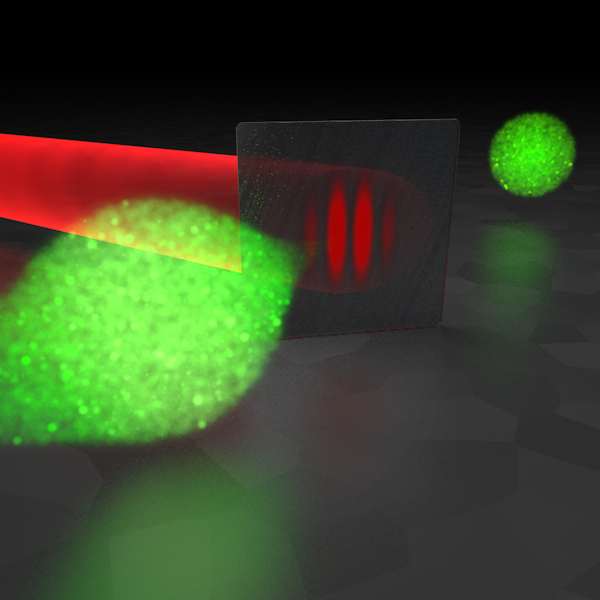 Our world is basically made up of atoms and electrons. They are very small and move around very rapidly in case of processes or reactions. Although seeing atoms is nowadays possible, for example with modern electron microscopes, tracking atomic movements requires ultrashort measurement periods in the femtosecond and attosecond range as well.

Such extremely fast “camera shutter speeds” can be reached through ultrashort electron pulses, which are shorter than the time scale of the motion. The shorter the pulse, the higher the resolution. Equally important for experiments, however, is a special shaping of the electron pulses in space and time, adjusted to the properties of the substance in question.

Konstanz physicist Professor Peter Baum and his team now succeeded in spatially and temporally directing and controlling ultrashort electron pulses directly by using the light cycles of laser light, instead of the previously applied microwaves. The result is not only a shortened pulse duration, but the researchers were also able to “tilt” the pulses, that is, have them run in another direction than vertically to the pulse front. These findings have been published in the current edition of the scientific journal Physical Review Letters.

Tilted electron pulses provide a huge potential for materials studies in which the fundamental changes last only femtoseconds or attoseconds – periods between 10-15 and 10-18 seconds. These times correspond to the period of atomic oscillations in crystals and molecules, or to the period of an individual light oscillation.

Tilted pulses are also highly relevant for free-electron lasers for producing more intense and shorter X-ray flashes for analyzing ultrafast processes. “Our results show that we can now shape and control electron pulses as eclectically as laser pulses, at the imaging resolution of modern electron microscopy”, summarizes Peter Baum.

According to quantum mechanics, the properties of particles at the smallest scale come in pairs, such as position and momentum in the uncertainty principle. And in the case of tilting? In laser optics it has been known for quite some time that the different colours must run into different directions. In their experiments the researchers from Konstanz and Munich now demonstrated that these old laws of laser optics equally apply to the matter wave of electrons, too, even though the electrons have a rest mass and are not coherent like laser light.

It is probable that these measured relations between pulse tilt and angular dispersion are generally valid for all wave phenomena in physics. In that sense the spatial and temporal shaping of electron pulses that the researchers have now achieved is not only of practical use for ultrafast materials research, but is also fundamentally interesting for physics in general.

Facts:
• Technology to shape electron pulses in space and time for materials studies in the femtosecond and attosecond range
• Collaboration between the University of Konstanz, the Ludwig Maximilian University Munich (LMU) and the Max Planck Institute of Quantum Optics
• The project was funded by the European Research Council and the LMU's Munich-Centre for Advanced Photonics
• More on the topic:
https://physics.aps.org/articles/v11/87