Supernova may have 'burped' before exploding 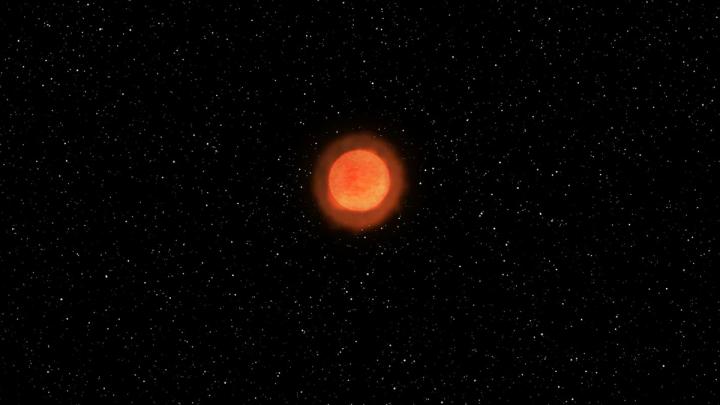 The FELT, captured in 2015, rose in brightness over just 2.2 days and faded completely within 10 days. Credit: NASA/JPL-Caltech

Only by increasing the rate at which telescopes monitor the sky has it been possible to catch more Fast-Evolving Luminous Transients (FELTs) and begin to understand them.

According to a new study in Nature Astronomy, researchers say NASA's Kepler Space Telescope captured one of the fastest FELTs to date. Peter Garnavich, professor and department chair of astrophysics and cosmology physics at the University of Notre Dame and co-author of the study, described the event as “the most beautiful light curve we will ever get for a fast transient.”

“We think these might actually be very common, these flashes, and we have just been missing them in the past because they are so fast,” Garnavich said. “The fact that one occurred in the small area of the sky being monitored by Kepler means they are probably fairly common.”

The FELT, captured in 2015, rose in brightness over just 2.2 days and faded completely within 10 days. Most supernovae can take 20 days to reach peak brightness and weeks to become undetectable.

Researchers debated what could be causing these particularly fast events but ultimately settled on a simple explanation: The stars “burp” before exploding and don't generate enough radioactive energy to be seen later. As the supernova runs into the gas expelled in the burp, astrophysicists observe a flash. The supernova then fades beyond their ability to detect it.

“Our conclusion was that this was a massive star that exploded, but it had a mass loss — a wind — that started a couple of years before it exploded,” Garnavich described. “A shock ran into that wind after the explosion, and that's what caused this big flash. But it turns out to be a rather weak supernova, so within a couple of weeks we don't see the rest of the light.”

The only visible activity is from the quick collision of the gas and the exploding star, where some of the kinetic energy is converted to light. One mystery that remains is why the “burp” would happen such a short time before the supernova explosion. Astrophysicists want to know how the outside of the star reacts to what's happening deep in the core, Garnavich said.

While the Kepler telescope and its K2 mission is expected to run out of fuel and end in the coming months, NASA's Transiting Exoplanet Survey Satellite (TESS) is planned for launch following the K2 mission. Garnavich said data retrieved during the TESS mission could also be used to study FELTs.

The study was funded by NASA.

The study was led by Armin Rest at the Space Telescope Science Institute. Co-authors include Giovanni Strampelli, also at the Space Telescope Science Institute; David Khatami and Daniel Kasen at the University of California Berkeley and Lawrence Berkeley National Laboratory; Brad E. Tucker, research fellow at the Research School of Astronomy and Astrophysics, Mount Stromlo Observatory and the ARC Centre of Excellence for All-Sky Astrophysics; Edward J. Shaya, Robert P. Olling and Richard Mushotzky at the University of Maryland; Alfredo Zenteno and R. Chris Smith at the Cerro Tololo Inter-American Observatory; Steve Margheim at the Gemini Observatory; David James and Victoria A. Villar at the Harvard-Smithsonian Center for Astrophysics; and Francisco Förster at the University of Chile.