Home / Physics and Astronomy / Study of ‘polluted’ white dwarfs finds that stars and planets grow together
15.11.2022 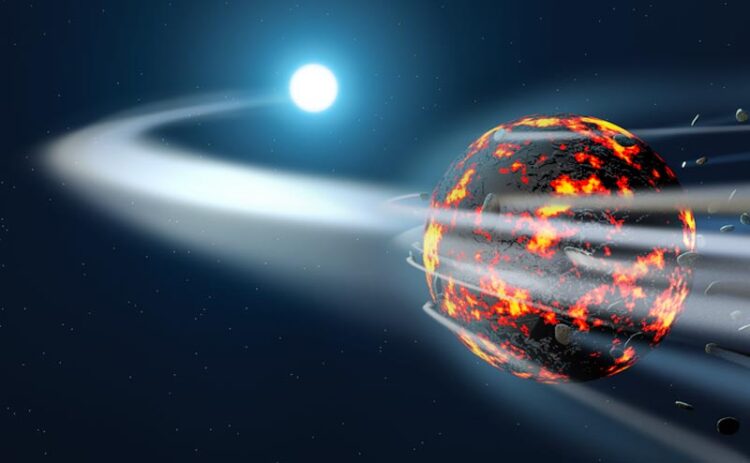 A team of astronomers have found that planet formation in our young Solar System started much earlier than previously thought, with the building blocks of planets growing at the same time as their parent star.
Credit: Amanda Smith

A team of astronomers have found that planet formation in our young Solar System started much earlier than previously thought, with the building blocks of planets growing at the same time as their parent star.

A study of some of the oldest stars in the Universe suggests that the building blocks of planets like Jupiter and Saturn begin to form while a young star is growing. It had been thought that planets only form once a star has reached its final size, but new results, published in the journal Nature Astronomy, suggests that stars and planets ‘grow up’ together.

The research, led by the University of Cambridge, changes our understanding of how planetary systems, including our own Solar System, formed, potentially solving a major puzzle in astronomy.

“We have a pretty good idea of how planets form, but one outstanding question we’ve had is when they form: does planet formation start early, when the parent star is still growing, or millions of years later?” said Dr Amy Bonsor from Cambridge’s Institute of Astronomy, the study’s first author.

To attempt to answer this question, Bonsor and her colleagues studied the atmospheres of white dwarf stars – the ancient, faint remnants of stars like our Sun – to investigate the building blocks of planet formation. The study also involved researchers from the University of Oxford, the Ludwig-Maximilians-Universität in Munich, the University of Groningen and the Max Planck Institute for Solar System Research, Gottingen.

“Some white dwarfs are amazing laboratories, because their thin atmospheres are almost like celestial graveyards,” said Bonsor.

Normally, the interiors of planets are out of reach of telescopes. But a special class of white dwarfs – known as ‘polluted’ systems – have heavy elements such as magnesium, iron, and calcium in their normally clean atmospheres.

These elements must have come from small bodies like asteroids left over from planet formation, which crashed into the white dwarfs and burned up in their atmospheres. As a result, spectroscopic observations of polluted white dwarfs can probe the interiors of those torn-apart asteroids, giving astronomers direct insight into the conditions in which they formed.

Planet formation is believed to begin in a protoplanetary disc – made primarily of hydrogen, helium, and tiny particles of ices and dust – orbiting a young star. According to the current leading theory on how planets form, the dust particles stick to each other, eventually forming larger and larger solid bodies. Some of these larger bodies will continue to accrete, becoming planets, and some remain as asteroids, like those that crashed into the white dwarfs in the current study.

The researchers analysed spectroscopic observations from the atmospheres of 200 polluted white dwarfs from nearby galaxies. According to their analysis, the mixture of elements seen in the atmospheres of these white dwarfs can only be explained if many of the original asteroids had once melted, which caused heavy iron to sink to the core while the lighter elements floated on the surface. This process, known as differentiation, is what caused the Earth to have an iron-rich core.

“The cause of the melting can only be attributed to very short-lived radioactive elements, which existed in the earliest stages of the planetary system but decay away in just a million years,” said Bonsor. “In other words, if these asteroids were melted by something which only exists for a very brief time at the dawn of the planetary system, then the process of planet formation must kick off very quickly.”

The study suggests that the early-formation picture is likely to be correct, meaning that Jupiter and Saturn had plenty of time to grow to their current sizes.

“Our study complements a growing consensus in the field that planet formation got going early, with the first bodies forming concurrently with the star,” said Bonsor. “Analyses of polluted white dwarfs tell us that this radioactive melting process is a potentially ubiquitous mechanism affecting the formation of all extrasolar planets.

“This is just the beginning – every time we find a new white dwarf, we can gather more evidence and learn more about how planets form. We can trace elements like nickel and chromium and say how big an asteroid must have been when it formed its iron core. It’s amazing that we’re able to probe processes like this in exoplanetary systems.”

Amy Bonsor is a Royal Society University Research Fellow at the University of Cambridge. The research was supported in part by the Royal Society, the Simons Foundation, and the European Research Council.