Home / Physics and Astronomy / Spinning rugby balls: The rotation of the most massive galaxies
23.05.2018

Spinning rugby balls: The rotation of the most massive galaxies 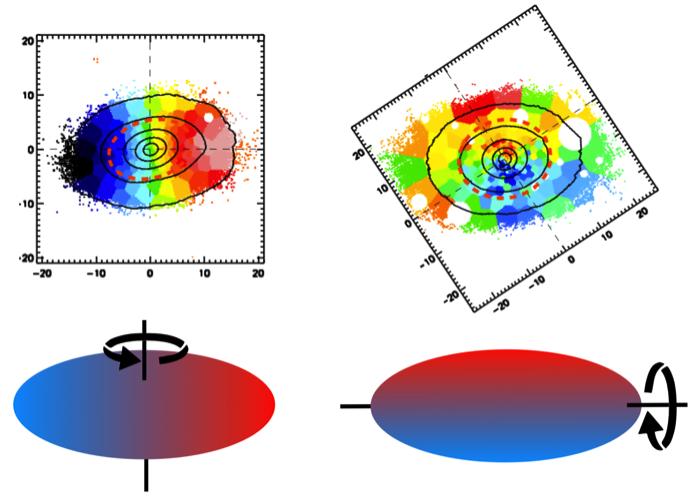 Mean stellar velocities: blue parts move towards, red away from us. The rotation around the long axes (r.) applies only to a small fraction of galaxies. This increases as galaxies become more massive. MUSE/D. Krajnovic

Surveying the extremes of the galaxy population

Measuring the way stars move within galaxies is a very powerful way of learning about the internal structure of galaxies, especially properties such as their three-dimensional shape and, ultimately, what their gravitational potential is like.

To study the largest and most massive galaxies, a science team led by Davor Krajnovic from the Leibniz Institute for Astrophysics Potsdam (AIP) selected a sample of some of the brightest galaxies up to a distance of 800 million light years.

These live in large ensembles of galaxies, within some of the most densely populated regions of our Universe, such as the Shapley Supercluster. They are also very bright and rare.

The most massive galaxies are about one hundred times more massive than our own galaxy the Milky Way, which itself already has a stellar mass of 60 billion suns. They also have almost no gas, most of their stars are very old (at least 10 billion years) and do not form stars anymore.

Unfortunately, these galaxies are too far from us to be resolved into individual stars and their motions. One can only look at the average motions of stars within certain regions.

“This is what integral-field spectrographs are good at”, explains Davor Krajnovic. „We observed these galaxies with MUSE, the wonderful integral-field spectrograph on the ESO's Very Large Telescope on Cerro Paranal in Chile. Massive galaxies can have all sorts of kinematics, some spin like frisbees, but most have no specific sense of rotation. We observed the most massive galaxies and found them to be different from other galaxies.”

From discs to rugby balls

The majority of intermediate-mass galaxies shows very regular stellar motions, as one would expect from discs like our Milky Way. In such galaxies, the sense of rotation is well defined around the short axis of the object; the angular momentum is aligned with the minor axis of an oblate spheroid.

“We knew that about only 15% of the intermediate mass galaxies have irregular kinematics or even don’t show much rotation at all”, says Krajnovic. “For such galaxies, the sense of rotation is often not aligned with any of the symmetry axes of the galaxy, and these galaxies are of nearly spherical shape, or are elongated resembling rugby balls. Some of them have an interesting alignment and rotate around the long axis of the galaxy. Only a few cases of these were known.”

In this new study published in the Monthly Notices of the Royal Astronomical Society, the authors showed that these galactic “spinning rugby balls” are much more common than thought previously if one looks at the extremely massive galaxies, the high-mass end of the galaxy population.

The result is interesting as it points to a very specific formation scenario for these galactic giants. Numerical simulations indicate that rotation along the long axis is indicative for a merger of two massive galaxies with similar size (and mass) when they are on special trajectories: sort of a head-on collision in space.

Such galaxy collisions are violent events that completely reshape the internal structures of the progenitor galaxies. The remnant galaxies resemble spinning rugby balls. Stellar orbits also become much more complex, resulting in kinematics where the simple ordered motion is substituted with complex streaming around any of the three axes of a spheroid. The most massive galaxies are the end points of galaxy formation, and deservedly turn out to be the most complex stellar systems. This study helps us unveil the mystery of how the most massive galactic systems in the Universe come into existence.