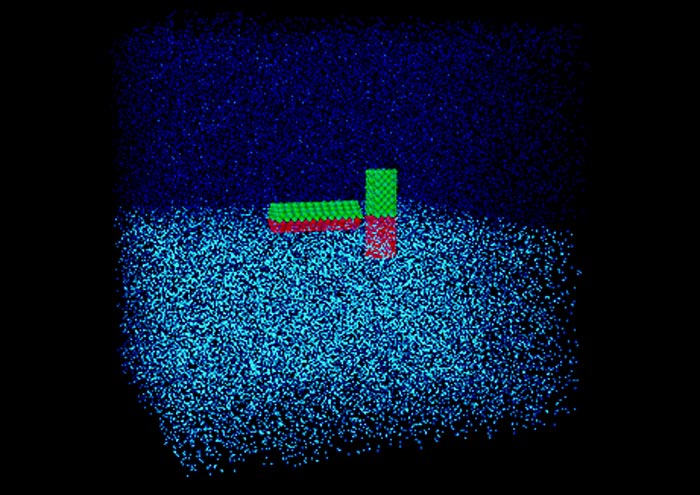 Janus rods with the same surface characteristics except for the geometry of the coating are depicted. The particles assume completely different orientations, implying they also assume different mechanical properties for the overall interface.
Credit: Giovanniantonio Natale

Interfacial diffusion of nanoparticles strongly affected by their shape and surface coating.

The special nanoparticles were introduced to the scientific community by 1991 Nobel Prize winner Pierre-Gilles de Gennes, who pointed out that “objects with two sides of different wettability have the unique advantage of densely self-assembling at liquid-liquid interfaces,” and consequentially, generating new colloidal structures.

The resulting chemical asymmetry led to the discovery of new and unusual molecular properties, making Janus particles relevant to a wide range of applications, from biomedicine to water-repellent textiles to fabrication of membranes with tunable properties.

In Physics of Fluids, by AIP Publishing, researchers from the University of Calgary, in Alberta, Canada, use dissipative particle dynamics (DPD) simulations to examine the translational diffusion of Janus nanoparticles at the interface between two immiscible fluids, incapable of mixing or attaining homogeneity.

Focusing on a cluster of spherical particles used to create a rigid body of Janus rods, the simulations shed light on the dynamic behavior of the nanoparticles, with varying surface coatings and sizes, at a water-oil interface. The work reveals a strong influence of their shape on their orientation at the interface as well as on their mobility.

“As a result, these varying individual responses modify the interfacial tension of the entire system, which impacts rheology and, thus, processing schemes,” said co-author Giovanniantonio Natale.

Natale and his colleagues describe a “tilting and tumbling” effect due to the presence of local energy minima at the interface, an effect that varies with the aspect ratio of the Janus rods and the surface coverage of their coatings.

Interfacial tension is shown to reduce with increased aspect ratio as particles shift from an upright position to a tilted orientation. The tension reduces when the coatings are horizontal rather than vertical, since the particles are more stabilized in their orientation.

In theory, these findings imply the geometrical characteristics of Janus particles can be modified without their surface chemistries becoming altered to produce either stable or unstable emulsions.

Altogether, the work provides significant and fundamental insight into the dynamics and self-assembly of anisotropic Brownian particles at interfaces, which may better inform the design and fabrication of engineered interfaces.

“Moreover, we can employ our DPD simulations to optimize systems at the nanoscale, where performing and characterizing experiments is often extremely challenging and time-consuming,” said Natale.

The article “Dynamics of Brownian Janus Rods at a liquid-liquid interface” is authored by Mohammad Tanvir Hossain, Ian Gates, and Giovanniantonio Natale. The article will appear in Physics of Fluids on Jan. 25, 2022. After that date, it can be accessed at http://aip.scitation.org/doi/full/10.1063/5.0076148.

Physics of Fluids is devoted to the publication of original theoretical, computational, and experimental contributions to the dynamics of gases, liquids, and complex fluids. See https://aip.scitation.org/journal/phf.