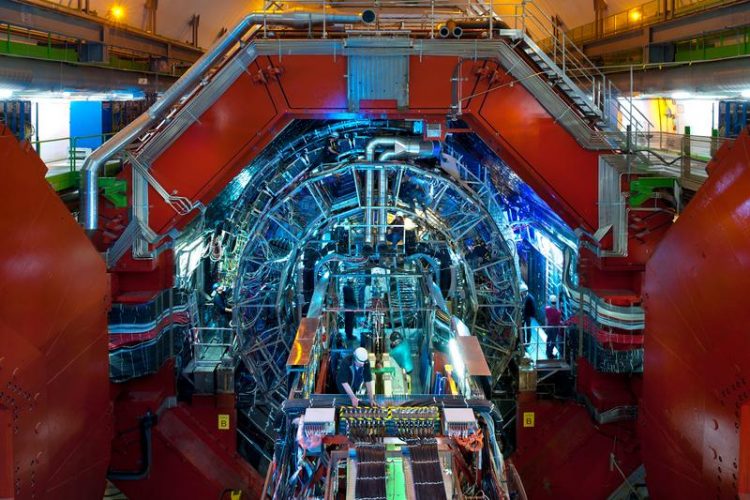 The ALICE detector. Photo: A. Saba/CERN

Then, in a phase transition, they combined and formed hadrons, among them the building blocks of atomic nuclei, protons and neutrons. In the current issue of the science journal “Nature”, an international team of scientists presents an analysis of a series of experiments at major particle accelerators which sheds light on the nature of this transition.

The scientists determined with precision the transition temperature and obtained new insights into the mechanism of cooling and freeze-out of the quark-gluon plasma into the current constituents of matter such as protons, neutrons, and atomic nuclei. The team of researchers consists of scientists from the GSI Helmholtzzentrum für Schwerionenforschung in Darmstadt, and from the universities of Heidelberg, Münster, and Wroclaw (Poland).

A central result: The experiments at world-wide highest energy with the ALICE detector at the Large Hadron Collider (LHC) at the research center CERN produce matter where particles and anti-particles coexist, with very high accuracy, in equal amounts, similar to the conditions in the early universe.

The team confirms, with analysis of the experimental data, theoretical predictions that the phase transition between quark-gluon plasma and hadronic matter takes place at the temperature of 156 MeV. This temperature is 120,000 times higher than that in the interior of the sun.

The physicists analyzed more precisely the yields of a number of particles and anti-particles. “Our investigations revealed a number of surprizing discoveries. One of them is that light nuclei and their anti-particles are produced at the same temperature as protons and anti-protons, although their binding energies are about 100 times smaller than the energy corresponding to the transition temperature”, explains Prof. Dr. Anton Andronic who recently joined the University of Münster from the GSI Helmholtzzentrum für Schwerionenforschung.

The scientists presume that such “loosely bound objects” are formed at high temperature first as compact multi-quark objects which only later develop into the observed light nuclei and anti-nuclei. The existence of such multi-quark states was proposed a long time ago but no convincing evidence was found.

Another remarkable observation concerns a phenomenon long known but poorly understood: Normally, quarks are confined into the interior of protons and neutrons; isolated quarks have never been observed, a property which scientists describe as “confinement”. In the interior of the fireball formed in nuclear collisions at high energy this confinement is lifted (deconfinement). The new study shows that charmonium states such as J/psi mesons, consisting of a pair of charm and anti-charm quarks, are produced far more often at LHC energies compared to observations at lower energies, such as at the “Relativistic Heavy Ion Collider” in the USA.

Because of the higher energy density at LHC the opposite, namely a reduction of J/psi mesons through dissociation was expected. In contradistinction, enhancement was predicted 18 years ago by two of the team members (Prof. Dr. Peter Braun-Munzinger, GSI, and Prof. Dr. Johanna Stachel, Universität Heidelberg) because of deconfinement of the charm quarks. The consequences of the prediction were worked out in detail in a series of publications by the whole team.

The now observed enhanced production of J/psi particles confirms the prediction: J/psi mesons can only be produced in the observed large quantities if their constituents, the charm- and anticharm quarks, can travel freely in the fireball over distances of a trillionth of a centimeter – corresponding to about ten times the size of a proton. “These observations are a first step towards understanding the phenomenon of confinement in more detail”, underlines Prof. Dr. Krzysztof Redlich of the University of Wroclaw (Poland).

Experiments at CERN and at Brookhaven National Laboratory

The data were obtained during several years of investigations in the framework of the experiment “ALICE” at the Large Hadron Collider accelerator at the research center CERN near Geneva. In “ALICE”, scientists from 41 countries investigated in collisions between two lead nuclei the state of the universe within microseconds after the Big Bang. The highest ever man-made energy densities are produced in such collisions.

These result in the formation of matter (quarks and gluons) as it existed at that time in the early universe. In each head-on collision more than 30,000 particles (hadrons) are produced which are then detected in the ALICE experiment. The actual study also used data from experiments at lower energy accelerators, the “Super Proton Synchrotron” at CERN and the “Relativistic Heavy Ion Collider” at the US-Brookhaven National Laboratory on Long Island, New York.

The investigations were supported in the framework of the “Collaborative Research Center” 1225 “Isolated quantum systems and universality under extreme conditions (ISOQUANT)” by the German Research Foundation (DFG). Furthermore, they were supported by the Polish National Science Center (NCN) (Maestro grant DEC-2013/10/A/ST2/00106).

The investigation of relativistic nuclear collisions has a long tradition at GSI, first at the SIS18 accelerator, then at the CERN SPS. Until 1995 the group was led by Prof. Dr. Rudolf Bock, from 1996 on by Prof. Dr. Peter Braun-Munzinger.

The ALICE group at GSI is since 1993 member of the ALICE collaboration and has played a leading role in the design and construction of the experiment as well as in operation and analysis. Prof. Braun-Munzinger had, as project leader of the ALICE Time Projection Chamber TPC as well as in the design and construction of the ALICE Transition Radiation Detector TRD, together with his team an important impact on the whole successful experiment and is involved in ALICE data analysis as well as in the development of projects for the future of ALICE. Since 2011 Prof. Dr. Silvia Masciocchi leads the ALICE GSI group.

The phenomenological investigations towards interpretation of the ALICE data which are central to this Nature publication were performed within the framework of the ExtreMe Matter Institute EMMI, currently led by Prof. Braun-Munzinger.

The results reported in the Nature publication are also trail blazing for research at the future FAIR facility: especially the results on the production of light nuclei and hyper-nuclei open new perspectives for the CBM experiment at FAIR.