Return of the Blob: Surprise link found to edge turbulence in fusion plasma 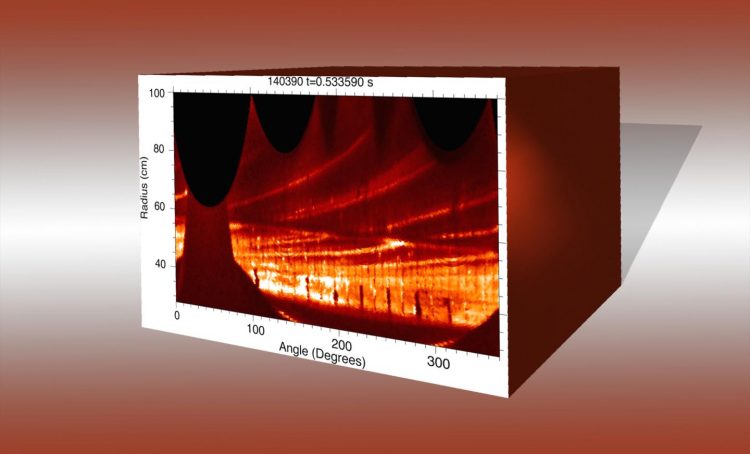 Image showing spiraling magnetic field fluctuations at the edge of the NSTX tokamak. Photo courtesy of Physics of Plasmas. Composition by Elle Starkman/Office of Communications

Further investigation of this correlation and its role in the loss of heat from magnetic fusion reactors will help to produce on Earth the fusion energy that powers the sun and stars.

Fusion reactions combine light elements in the form of plasma — the hot, charged state of matter composed of free electrons and atomic nuclei that makes up 99 percent of the visible universe — to produce massive amounts of energy.

Scientists are seeking to create and control fusion on Earth as a source of safe, clean and virtually limitless power to generate electricity.

PPPL researchers discovered the surprising link last year when re-analyzing experiments made in 2010 on PPPL's National Spherical Torus Experiment (NSTX) — the forerunner of today's National Spherical Torus Experiment-Upgrade (NSTX-U). The blobs and fluctuations in the magnetic field, called “magnetohydrodynamic (MHD)” activity, develop in all tokamaks and have traditionally been seen as independent of each other.

The first clue to the correlation was the striking regularity of the trajectory of large blobs, which travel at roughly the speed of a rifle bullet, in experiments analyzed in 2015 and 2016. Such blobs normally move randomly in what is called the “scrape-off layer” at the edge of tokamak plasma, but in some cases all large blobstraveled at nearly the same angle and speed.

Moreover, the time between the appearance of each large blob at the edge of the plasma was nearly always the same, virtually coinciding with the frequency of dominant MHD activity in the plasma edge.

Researchers then tracked the diagnostic signals of the blobs and the MHD activity in relation to each other to measure what is called the “cross-correlation coefficient,” which they used to evaluate a set of the 2010 NSTX experiments. Roughly 10 percent of those experiments were found to show a significant correlation between the two variables.

The scientists then analyzed several possible causes of the correlation, but could find no single compelling explanation. To understand and control this phenomenon, Zweben said, further data analysis and modeling will have to be done — perhaps by readers of the Physics of Plasmas paper.

Support for this work comes from the DOE Office of Science, with portions of the research performed under the auspices of Lawrence Livermore National Laboratory.

PPPL, on Princeton University's Forrestal Campus in Plainsboro, N.J., is devoted to creating new knowledge about the physics of plasmas — ultra-hot, charged gases — and to developing practical solutions for the creation of fusion energy. The Laboratory is managed by the University for the U.S. Department of Energy's Office of Science, which is the single largest supporter of basic research in the physical sciences in the United States and is working to address some of the most pressing challenges of our time.