Once a myth, now an object of study 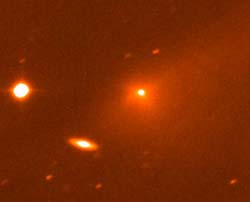 On 26 February, Rosetta will be setting off on its long journey through our solar system to meet up with Comet Churyumov-Gerasimenko. It will take the European Space Agency (ESA) space probe ten years to reach its destination.

The comet, which moves in an elliptical orbit around the Sun, will at rendezvous be some 675 million kilometres from the Sun, near the point in its orbit farthest from the Sun. The meeting point was not chosen at random: at this point the comet is still barely active, it is still in fact a frozen lump of ice and interplanetary dust, in all probability the matter from which our solar system emerged four and a half billion years ago. Rosetta’s job is to find out more about these strange bodies that travel through our solar system.

As it moves on, the comet will begin to change. As it approaches the Sun, it will – like all comets – become active: in the warmth of the Sun’s rays, the ices evaporate, tearing small dust particles from the surface. This produces the comet head (the coma) and tail during solar flyby skims several metres of matter off the comet’s surface. In the case of a small comet like Churyumov-Gerasimenko, the shrinkage is a good 1% each time round.” As it flies past the Sun every 6.6 years it can look forward to a short future, especially on a cosmic timescale.

Visible cometary phenomena have fascinated human beings from time immemorial – and frightened them too. Even today mystical explanations prevail among some of the Earth’s peoples. The Andaman islanders, a primitive people living in the Gulf of Bengal, see comets as burning torches hurled into the air by forest spirits – the more easily to detect humans foolish enough to stay out at night. For some Australian aborigines, comets are flaming sticks ridden by mighty shamans.

Efforts to provide a scientific explanation of the ‘cometa aster’ (‘hairy star’) phenomenon stretch back to ancient times. A widely held view was that comets were in some way connected with processes at work in the atmosphere. In Meteorologica, Aristotle (384-322 BC) described how inflammable gases escape from clefts in rocks, collect in the upper layers of the sub-lunar world (‘world under the Moon’) and ignite. Rapid release of such gases produced a shooting star; when let out slowly, they gave rise to a comet. That was Aristotle’s best shot – and he was well aware of his limited insight into the question. As he himself acknowledged: “As we have no demonstrable basis for assertions about comets, I have to settle for an interpretation that does not conflict with established truths.” Admittedly such truths were thin on the ground at the time.

Comets – something of a disaster

As the centuries unfolded, what could be called the opposite view – that the comets were responsible for intense heat spells – also gained a considerable audience, though there was just as little truth in it. The natural philosophers went one further. They said comets lead to heat, heat to storms and storms to natural disasters. Pliny the Elder for example (born circa 23 AD) listed twelve cometary phenomena according to their external appearances. And he assigned one natural disaster to each class.

The Christian Middle Ages no longer saw cometary phenomena as the blind raging of an even blinder nature, preferring to interpret them as signs from God. Theologians such as Saint Hildegard of Bingen (1098-1179) and Albert Magnus (1200-1280) cited holy scripture. The Book of Jeremiah for example (1:11,12), in which God caused a fearsome “rod of an almond tree” to appear in the sky, a symbol of the prophet’s empowerment. Or again Luke 21:11: “And great earthquakes shall be in divers places, and famines, and pestilences; and fearful sights and great signs shall there be from heaven.”

In 1066, Halley’s Comet appeared to many as a harbinger of the Norman conquest of Britain, so vividly portrayed in the Bayeux tapestry, with its scenes from the Battle of Hastings.

The decisive step towards overturning the view that comets are atmospheric phenomena was taken in 1577 by Danish astronomer, Tycho Brahe. For two and a half months he observed from his observatory in Uranienburg the progress of a comet across the heavens. Relying on the phenomenon of the daily parallax – an apparent “shuddering” motion of heavenly bodies in fact attributable to the observer’s position on the revolving Earth – he was able to establish that the comet had to be located beyond the lunar orbit.

The scientific description of comets took another major step forward in 1705 thanks to the work of the British astronomer and physicist, Edmond Halley, a friend and patron of Isaac Newton. Investigating recorded comet measurements, he observed that the orbits of a number of bright comets were very similar: his own calculation of the orbit of a comet observed in 1682 coincided with the data recorded by Johannes Kepler in 1607 and by Apianus in 1531. He concluded that various comet observations were attributable to one and the same comet.

Halley was proved right when in December 1758, the comet whose return he had predicted, thenceforth named after him, did indeed make a repeat appearance. This confirmed his theory that apparently parabolic comet orbits were in fact “simply” sections of one enormous elliptical orbit. Since then observations recorded in China in 240 BC have been identified as relating to a sighting of Halley’s comet, the oldest known document dealing with this phenomenon.

What was described in the Bible as a sign from God was seen by Fred Hoyle, the British astrophysicist, as a possible explanation for the great hiatal breaks in history. He took the view that such extraordinary developments as the extinction of the mammoth were attributable to strikes by comet fragments. His views incorporated the theory advanced by British astronomers Victor Clube and Bill Napier in 1982 that a giant comet was trapped by our solar system 15000 years ago. With the return of that comet every 1600 years, the accompanying debris – so the argument goes – prompted some of the world’s great turning points. This might also be an explanation for such legends as the Flood.

A lump of icy sludge

So what does the actual nucleus of a comet look like? One answer was supplied by the Giotto space probe in a mission masterminded by ESA. The probe was named after the major Italian painter Giotto di Bondone, who, in the early 14th century, portrayed a comet in his fresco in the Scrovegni Chapel in Padua. On 14 March 1986, the probe succeeded in taking 100-metre-resolution pictures of the nucleus of Halley’s Comet from only 600 kilometres away. In the words of Uwe Keller: “The mission forced us to revisit our long-standing image of a comet nucleus as a ‘dirty snowball’. The pictures showed that it was more like a lump of icy sludge. The solid part of the nucleus is much larger than the icy part.”

Bur hardly had Giotto trained its electronic eye on the heavenly body than the photo opportunity was already over; a dust particle measuring about a millimetre hit the probe. As the velocity differential between probe and comet was at that point 68.4 km per second, the force of the involuntary encounter was enough to put paid to any further snapshots. All the same, despite the damage to the camera, it proved possible to go on with the mission. Following two periods of “hibernation”, Giotto achieved a successful flyby of the Grigg-Skjellerup comet on 10 July 1992.

Rosetta should now bring us entirely new knowledge about comet nuclei. It will orbit the comet and deposit a small lander probe on its surface. So for the first time in history a comet travelling sunwards will be investigated from close quarters.