Unlocking the secrets of the universe: Rosetta lander named Philae 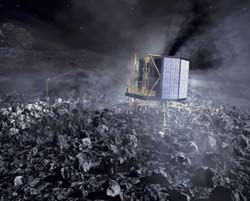 ESA PR 08-2004. With just 21 days to the launch of the European Space Agency’s Rosetta comet mission, the spacecraft’s lander has been named “Philae”. Rosetta embarks on a 10-year journey to Comet 67P/Churyumov-Gerasimenko from Kourou, French Guiana, on 26 February.

Philae is the island in the river Nile on which an obelisk was found that had a bilingual inscription including the names of Cleopatra and Ptolemy in Egyptian hieroglyphs. This provided the French historian Jean-François Champollion with the final clues that enabled him to decipher the hieroglyphs of the Rosetta Stone and unlock the secrets of the civilisation of ancient Egypt.

Germany, France, Italy and Hungary are the main contributors to the lander, working together with Austria, Finland, Ireland and the UK. The main contributors held national competitions to select the most appropriate name. Philae was proposed by 15-year-old Serena Olga Vismara from Arluno near Milan, Italy. Her hobbies are reading and surfing the internet, where she got the idea of naming the lander Philae. Her prize will be a visit to Kourou to attend the Rosetta launch.

Study of Comet Churyumov-Gerasimenko will allow scientists to look back 4600 million years to an epoch when no planets existed and only a vast swarm of asteroids and comets surrounded the Sun. On arrival at the comet in 2014, Philae will be commanded to self-eject from the orbiter and unfold its three legs, ready for a gentle touchdown. Immediately after touchdown, a harpoon will be fired to anchor Philae to the ground and prevent it escaping from the comet’s extremely weak gravity. The legs can rotate, lift or tilt to return Philae to an upright position.

Philae will determine the physical properties of the comet’s surface and subsurface and their chemical, mineralogical and isotopic composition. This will complement the orbiter’s studies of the overall characterisation of the comet’s dynamic properties and surface morphology. Philae may provide the final clues enabling the Rosetta mission to unlock the secrets of how life began on Earth.

“Whilst Rosetta’s lander now has a name of its own, it is still only a part of the overall Rosetta mission. Let us look forward to seeing the Philae lander, Osiris, Midas and all the other instruments on board Rosetta start off on their great journey this month,” said Professor David Southwood, ESA Director of Science.