A new entry in the science X-games 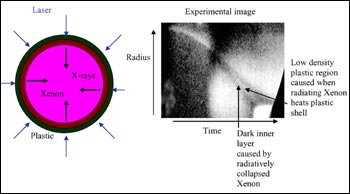 45th Annual Meeting of the Division of Plasma Physics

The emerging field of high energy density physics has been described by a recent National Academy of Science report as the “X-games” of contemporary science. The term high energy density is used to describe matter with pressures more than 1 million times the pressure on the surface of the earth. While high energy density matter is extreme by terrestrial standards, it can be found throughout the universe in a number of astrophysical settings and can be made for short times and within small volumes in the laboratory. In an invited talk on Monday morning Mark Herrmann of DOE’s Lawrence Livermore National Laboratory will describe recent expaeriments that provide a new entry for the “X-games”: the laser driven dynamic hohlraum.

The new entry, called a laser driven dynamic hohlraum, consists of a spherical, laser-driven implosion of a plastic shell filled with xenon. As this thin shell implodes it sweeps up the xenon and causes it to radiate x-rays. When enough radiating xenon has been swept up, the xenon begins to trap x-ray radiation on the inside, creating a time-evolving cavity of intense x-rays — a dynamic hohlraum. With this technique, it may be possible to achieve very high energy densities on experiments at the National Ignition Facility, which began initial physics operations this year.

The initial experiments testing this concept have been carried out using the OMEGA laser at the University of Rochester’s Laboratory for Laser Energetics. Forty beams of OMEGA are used to directly drive a thin capsule filled with xenon gas (left panel). A shock is driven in the xenon, which radiates so strongly that it collapses to a thin dense layer. This dense xenon layer traps x-rays. An image is generated by 10 of the remaining beams (right panel). Initially a low level of signal may be seen due to the self-emission from the laser-heated plastic. After the drive beams turn off the radiography beams are turned on, and the remaining plastic and the thin, dense, shock in the Xenon may be seen as dark shadows. A region of low density plastic that has been created by the radiating shock separates the two dark bands. Simulations of this concept predict a hollow region that is in good agreement with the experiment.