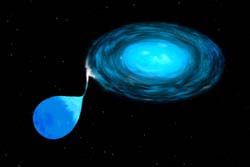 BURSTER — This double-star system, located approximately 28,000 light-years away in the constellation Sagittarius, is a source of powerful bursts of X-ray emission. Argonne physicists have made precise measurements of exotic isotopes that explain the characteristic X-ray spectrum and luminosities of such "X-ray bursters." Illustration courtesy Dana Berry, Space Telescope Science Institute. <br>

Argonne physicists have precisely measured the masses of nuclear isotopes that exist for only fractions of a second or can only be produced in such tiny amounts as to be almost nonexistent in the laboratory. Some isotopes had their masses accurately measured for the first time.

X-ray bursters comprise a normal star and a neutron star. Neutron stars are as massive as our sun but collapsed to 10 miles across. The neutron star’s ferocious gravitational field pulls gas from its companion until the neutron star’s surface ignites in a runaway fusion reaction. For a few tens of seconds, the light from the explosion may be the most brilliant source of X-rays in the sky.

The rapid proton capture process, or “rp-process,” is the dominant source of energy in a common type of X-ray bursters. In this nuclear fusion reaction, nuclei capture protons and transmute into a heavier element, releasing energy in the process. For example, arsenic-67 can capture a proton to become selenium-68.

The rp-process proceeds in fits and starts, due to what physicists call “waiting-point nuclei.” Some nuclides, like selenium-68, can’t absorb an incoming proton as quickly as others can. The reaction must “wait” for the nucleus to absorb a proton – which may take up to 30 minutes, a relative eternity – or for the neutron to decay to a proton, called beta decay, to convert the nuclide into one with a more favorable capture rate. A beta-decay, for example, converts the selenium-68 nucleus into arsenic-68. Arsenic-68 readily captures a proton, changing to selenium-69, and so on.

“How long the nova or X-ray burst lasts, and how far the rp-process reactions proceed, is determined by the properties of these few waiting-point nuclei,” said physicist Guy Savard, principal investigator. “Although there are hundreds of nuclei in an X-ray burst, the properties of half a dozen of them make all the difference.”

Accurate measurements of waiting-point nuclei masses explain the astronomical observations of X-ray bursts and confirm theories of how they are produced. But measuring their masses is difficult. Some decay in fractions of a second; others can only be produced in such small amounts that standard spectrometry techniques give imprecise results.

Highly accurate mass measurements required the unique facilities available in Argonne’s Physics Division. The nuclei to be studied were created using the Argonne Tandem Linac Accelerator System (ATLAS). For example, selenium-68 was created by accelerating beams of nickel-58 to 220 million electron volts and slamming them into a carbon target. Some of the ions in the beam combine with nuclei in the target to create the ions of interest.

The created ions are slowed to a crawl in a “gas catcher” – a tube filled with pressurized helium. A gentle electric gradient pulls ions into a Canadian Penning Trap Spectrometer developed by Savard and other scientists at Argonne, the University of Manitoba and McGill University, Montreal, Texas A&M University and the State University of New York.

The Penning trap confines ions using magnetic and electric fields. A measurement may involve perhaps only a dozen individual ions, which can stay suspended in the trap for many seconds. Their masses can then be measured using radio-frequency (RF) fields.

“The ions will accept energy from the RF field only at certain frequencies,” Savard said. “These frequencies are related to properties of the ion, particularly the mass. By looking at what energies they accept, you can precisely determine the mass.”

Ions with previously unknown masses included antimony 107 and 108. The mass of selenium-68 was determined with 30 times more precision than previous, and contradictory, measurements.

“This is a unique system, because with the new gas catcher, we can inject any species that can be produced here at ATLAS,” Savard said. “Research is ongoing. We’re now exploring around the tin region, where the rp-process is expected to terminate.”

The nation’s first national laboratory, Argonne National Laboratory conducts basic and applied scientific research across a wide spectrum of disciplines, ranging from high-energy physics to climatology and biotechnology. Since 1990, Argonne has worked with more than 600 companies and numerous federal agencies and other organizations to help advance America’s scientific leadership and prepare the nation for the future. Argonne is operated by the University of Chicago as part of the U.S. Department of Energy’s national laboratory system.