Home / Physics and Astronomy / Million-star cluster in nearby galaxy reported
06.06.2003

Million-star cluster in nearby galaxy reported 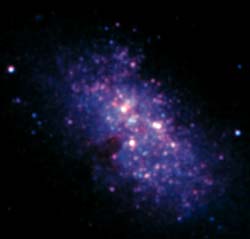 A small, bizarre cluster of a million young stars, enshrouded in thick gas and dust in a nearby dwarf galaxy, has been confirmed by Jean Turner, UCLA professor of physics and astronomy, and her colleagues, in the June 5 issue of the journal Nature.

Turner and her colleagues estimate that the stars are still in the process of forming, and are less than a million years old — extremely young by astronomical standards.

The cluster contains more than 4,000 massive “O” stars, each a million times brighter than our sun, with more than 30 times the mass of our sun. “O” stars blow off violent winds, and are the most luminous of all known stars. These “O” stars will become supernovae and explode at the end of their lives, but none has done so yet.

“This is the first time such a large cluster of ‘O’ stars, bound with its natal gas, has been observed anywhere in the universe,” Turner said. “These ‘O’ stars should not fit in this small region, yet somehow they do.”

The research is federally funded by the National Science Foundation.

The star cluster is buried within a “supernebula” consisting of hot gases in the galaxy NGC 5253, in the southern part of the sky, slightly above the horizon, in the constellation Centaurus. The supernebula is hidden from optical view by its own gases.

The stars are packed tightly in a region only three light years across — less than the distance from our sun to its closest neighbor star, Turner said.

The star cluster is surrounded by thick gases that move faster than 100,000 miles per hour — faster than the speed of sound — yet they are trapped by gravity.

“The dense gases are bound by the enormous gravity of the cluster, which makes this cluster different from any other known young cluster,” Turner said. “It’s truly a unique object. I originally titled this paper, ‘Supernebula in Gravitational Bondage.’ Clusters in our galaxy are not nearly as massive and cannot trap their gas.”

“It’s a mystery why this tiny galaxy can form globular clusters at the present time and the Milky Way can’t,” Turner said. “We hope to be able to solve this mystery. How a million stars can form in such a small region is also a mystery.”

The cluster has one billion times the luminosity of our sun, but is invisible in ordinary light. Turner’s team detected the cluster using infrared and radio observations. The astronomers detected the radio emission of the object in 1996, but needed the new infrared analyses to exclude possibilities other than the star cluster, and to see that the gases are trapped by gravity, Turner said.

Turner and her colleagues will look for other examples of young star clusters, and hope to learn more about star formation within this cluster, using infrared and radio emissions.

“We haven’t observed this type of start formation before,” Turner said. “This globular cluster is invisible to ultraviolet telescopes, and could remain invisible for most of its star-forming lifetime.”