Reconstructing what makes us tick 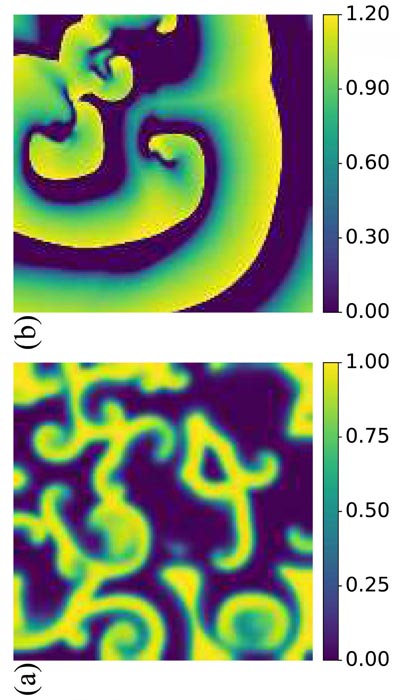 Snapshots of the dynamics of the (a) Barkley model and (b) Bueno-Orovio-Cherry-Fenton (BOCF) model at time step n = 1,000 of the test data set. Credit: Roland S. Zimmermann

Cardiac arrhythmia results when the usual symphony of electric pulses that keep the heart's muscles in sync becomes chaotic. Although symptoms are often barely noticeable, arrhythmia leads to hundreds of thousands of deaths from unexpected, sudden cardiac arrest in the United States each year.

A major issue that limits modeling to predict such events is that it is impossible to measure and monitor all the hundreds of variables that come together to make our hearts tick.

A pair of researchers at the Max Planck Institute for Dynamics and Self-Organization developed an algorithm that uses artificial intelligence in new ways to accurately model the electrical excitations in heart muscle.

“In this case, you have to try to get this information about those quantities that you can't measure from quantities that you can measure,” said Ulrich Parlitz, an author on the paper and a scientist at the Biomedical Physics Research Group at Max Planck Institute for Dynamics and Self-Organization. “This is a well-known but challenging problem, for which we provided a novel solution employing machine learning methods.”

Because machine learning techniques have become more powerful, certain neural networks, such as ESNs, can represent dynamical systems and develop a memory of events over time, which can help understand how arrhythmic electrical signals fall out of sync.

The model that the researchers developed fills in these gaps with a dynamical observer. After training the algorithm on a data set generated by a physical model, Parlitz and his partner, Roland Zimmermann, fed a new time series of the measured quantities to the ESN. This process allowed the observer to cross-predict state vectors. For example, if researchers know the voltage in a certain area of the heart at a point in time, they can reconstruct the flow of calcium currents.

The team verified their approach with data generated by the Barkley and Bueno-Orovio-Cherry-Fenton models, which describe chaotic dynamics that occur in cardiac arrhythmias, even cross-predicting state vectors with noise present. “This paper deals with cross-prediction, but ESNs can also be used for making predictions of future behavior,” Parlitz said.

Understanding the electrical properties of the heart is only one part of the picture. Parlitz said that he and his colleagues are looking to include ultrasound measurements of the heart's internal mechanical dynamics. One day, the group hopes to combine different forms of measurements with models of a beating heart's electrical and mechanical features to improve diagnosis and therapies of cardiac diseases. “We broke a big problem down into many smaller ones,” Parlitz said.

Chaos is devoted to increasing the understanding of nonlinear phenomena in all disciplines and describing their manifestations in a manner comprehensible to researchers from a broad spectrum of disciplines. See http://chaos.aip.org.